On Tuesday, I completed my sixth hyakumeizan – 1,841-meter Mt. Zaō in Yamagata Prefecture. 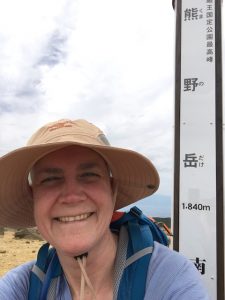 As a complex volcano, Zaō-san has many peaks, the highest of which is actually Kumano-dake (hence the name on the summit sign in the photo). As the most active volcano in the Tohoku region of northern Honshu, Zao continually emits volcanic gases (and the summit smells of sulfur).

I started my climb from the top of the ski lift near a statue of Jizō, the Buddhist deity often called the “excuse Buddha” (though technically he’s a Bodhisattva, because he delayed entry to nirvana to help others who are still suffering, both before and after death). 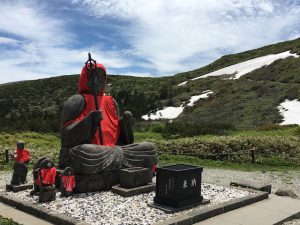 There was still a little snow on the mountain, but very little on the trails themselves. (Very much unlike my previous climb at Mount Hachimantai!)

From the Jizō statue, a trail of stairsteps climbs through bamboo grass and shrubs to the summit of Jizō Peak, and then along a ridge with beautiful views of the surrounding mountains. Past the ridge, the trail drops down to saddle with a cairn and another, smaller statue of Jizō. 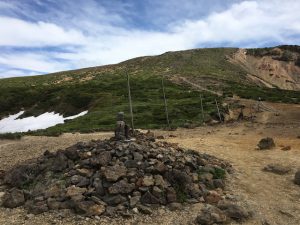 As always, I stopped to lay a stone on the cairn in honor of someone I know who needs help or prayers. These cairns represent prayers from many people, of many faiths, and although I respect all people’s beliefs (or lack thereof) I personally believe that it helps to offer prayers on behalf of others, and I add my stone to the cairns as a sign of those prayers and my respect.

Beyond the cairn, the trail heads upward again to another cairn (where once again I stopped to add a stone, this time for another friend): 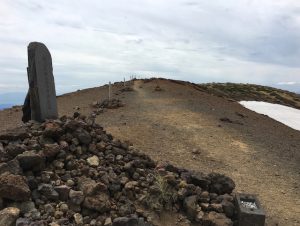 . . . and then across a scree-covered ridge to Zaō’s high point, Kumano-dake. (See my summit photo above). There’s a lovely Shintō shrine on the summit, and the views of the surrounding peaks are awe-inspiring, even on misty days. 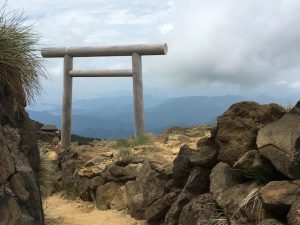 After spending a few minutes on the summit and enjoying some trail mix my mother bought me (in California, before I left for Japan, making it some of the best-traveled trail mix on the planet) I climbed down the other side of Kumano peak for a look at Zaō’s famous caldera lake, Okama, which changes color depending on the weather.

The day I visited, it was a deep emerald green: 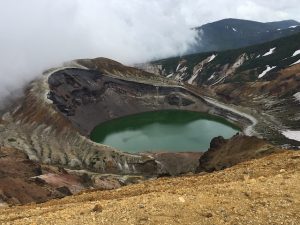 After a visit to the lake, I climbed back up a scree-covered slope and back to the trail I’d taken to reach the summit of Kumano-dake. From there, a one-hour return hike took me back to the visitor center. 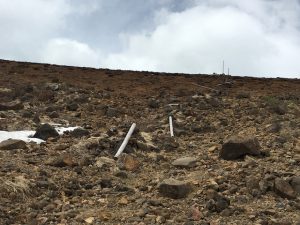 The highlight of this particular hike, however, was not the summit–or even the gorgeous crater lake. While eating my trail mix on the peak, I met a group of lovely Japanese women, one of whom has completed 99 of the hyakumeizan and has plans to complete her 100th peak in August! It was thrilling to meet someone so close to completing the hyakumeizan challenge, especially since I’ve just started my own hyakumeizan odyssey.

I’m back in Tokyo for a week, completing some writing work and finishing up some other projects, but the summit climbs will continue soon, and I hope you’ll keep coming back to join me on the 100 Summits trail!