Yesterday saw the addition of three more peaks to my #100Summits list, thanks to a traverse of two peaks and a gondola-assisted climb of a third in the Hakone area. While I’ll give more details about the later two climbs in the weeks to come, today I’m sharing a little about the first, which also involved research for my next Hiro Hattori mystery (the first one to involve a ghost).

Fellow crime fiction writer Annamaria Alfieri and I set off from Hakone on the H-line bus (which runs from the onsen resort town of Hakone-Yumoto to the nearby lakeside towns of Hakone-Machi and Moto-Hakone) and disembarked at Yusaka-michi Iriguchi (the Yusaka michi trailhead). 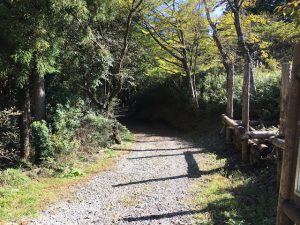 The Yusaka michi, or Yusaka trail, is an ancient Japanese travel road–older than the more famous Tōkaidō–which served a primary route for commerce and travel through the Hakone region starting in the Kamakura period (1185-1333). It fell into disuse after Shogun Tokugawa Ieyasu established the Tōkaidō during the early Edo period (1603-1868), but was still in existence during the 16th century, when my books are set.

We hiked along the ancient trail, past fields of blossoming silver grass and soaring pines and cedars. The path remains broad and well traveled to this day.

Along the way we also saw torikabuto plants in bloom. Also known as wolfsbane, monkshood, and aconite (Aconitum sp.) this poisonous plant grows wild in Japan and was used by poisoners long before Japan’s medieval era. It also features as the murder weapon in one of my Hiro Hattori novels – but I won’t tell you which . . . you’ll have to read* and find out for yourself!

(*Not a sales pitch – I simply refuse to give away spoilers.)

After a relatively short but enjoyable hike, Annamaria** and I reached the summit of Mt. Takanosu, her first and my 34th summit in Japan. 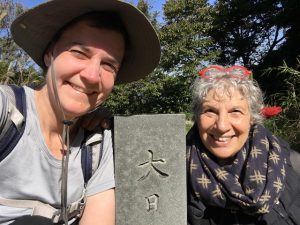 We took a quick break to enjoy the moment and then continued down the other side of the mountain toward our next goal of the day: the summit of neighboring Mount Sangen. More on that climb another day!

** Annamaria Alfieri writes fantastic mystery novels, from her standalone City of Silver and Blood Tango to her compelling series set in British East Africa. If you like crime fiction, she’s an author you should be reading – get thee to a bookery!

2 thoughts on “Torikabuto and Takanosu”