I started planning the 100 Summits Project a year ago, and even then I knew the most difficult region of Japan in which to climb would be Hokkaido, Japan’s northernmost major island. Most of Hokkaido lies beyond the northernmost terminus of the Shinkansen (bullet train) which ends its run at Shin-Hakodate-Hokuto terminal, 1,099 kilometers from Tokyo but only at the southernmost end of Hokkaido itself. From there, it’s almost a full day’s ride by express train to the northern end of the island – and the hyakumeizan peaks are scattered across Hokkaido like a handful of dice flung down by an angry child.

Due to the difficulties and distances–including the fact that several of the mountains are not easily reached (or reachable at all) without a private car–I decided to arrange for assistance on my Hokkaido climbs. After doing some research, I reached out to Hokkaido Nature Tours, a company that offers both pre-planned and custom nature and climbing tours in Hokkaido. In the months that followed, I worked with them to plan a twelve-day trip with attempts on seven of the nine hyakumeizan on the island of Hokkaido. (The remaining two, Asahidake and Rishiridake, I’ll be attempting on my own.)

The trip was scheduled to begin today – September 9 – and then, three days ago, a massive 6.7 earthquake rocked southeastern Hokkaido. The entire island lost power, and 20 people lost their lives. I debated the merits of continuing my climbs in light of the disaster, but after talking with my guides and seeing the valiant efforts Japan and its people were putting into recovering from the disaster, I decided to move ahead with the climbs as planned. (The mountains I am climbing are not in the danger zone itself, and although some parts of the island are still impacted by the disaster, many of the places I will be traveling were not damaged by the quake.)

Last night I arrived in Shin-Hakodate-Hokuto by train, and this morning I headed to Sapporo by highway bus. Once there, I met my guide, and we traveled farther north, to Niseko, where I spent a relaxing hour in an open-air volcanic hot spring bath (an onsen) 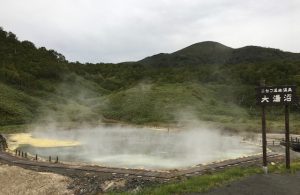 and had my first taste of ice cream made by a Hokkaido dairy farm. 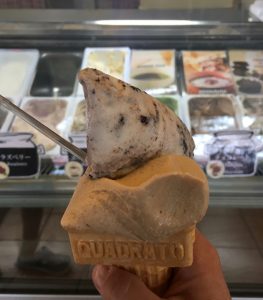 Tomorrow, my guide and I will leave at the crack of dawn for the first of my climbs: Mount Yotei, which towers 1,898 meters high above Niseko and the surrounding region. 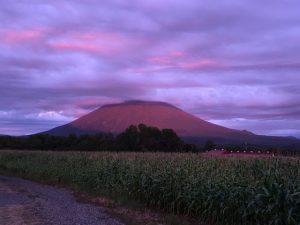 Wish me luck…I’ll tell you how it goes.