As I wait for the snow to melt on the hyakumeizan peaks, I’m also visiting sites of interest and festivals (matsuri) taking place around Japan. 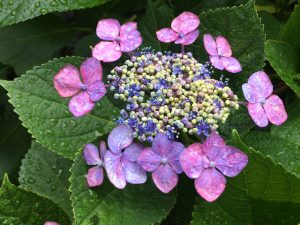 Flowers are a particularly important part of Japanese culture, and Bunkyo City, in Tokyo, celebrates five major flower festivals every year. Last weekend (June 9-10) was the Ajisai (Hydrangea) matsuri, celebrating the spectacular hydrangeas that bloom in Tokyo–and across Japan–each June.

On Sunday morning, I hopped a train to Hakusan Jinja (Shrine)–site of the Ajisai festival–where over 3,000 hydrangea bushes were covered in spectacular blooms. 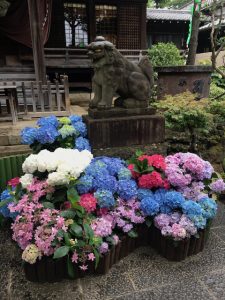 My favorite variety have satellite flowers around a tightly-packed center: 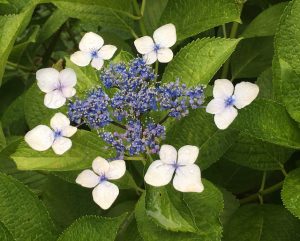 We had a hydrangea bush in the back yard of my childhood home. I loved its enormous, puffy blooms–and seeing them in Japan reminds me of the happy days I spent playing near and beneath the hydrangea flowers. 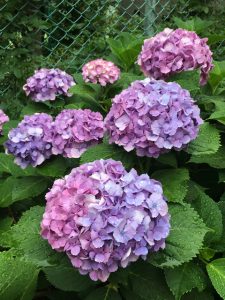 As usual during a festival, vendors lined the grounds of Hakusan Jinja selling everything from yakitori (grilled chicken on skewers) to candy, beer, and even roasted corn-on-the-cob.

I tend to bypass the “normal” fare–things I can easily get in the States, or even elsewhere in Tokyo–in favor of the seasonal, regional, or special matsuri treats. On Sunday, that meant dango–balls of glutinous rice that’s pounded into a paste and shaped, often with added flavorings or sweeteners. At the ajisai matsuri, I discovered special dango – one flavored with black sesame paste and rolled in sesame seeds, and the other covered in sugar and edible flowers: 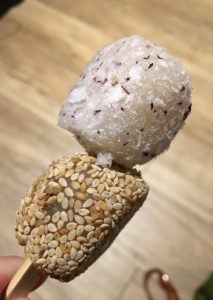 Hakusan Jinja has a special sacred hydrangea garden built on a hill. The flowers are spectacular, and visitors lined up for the chance to walk through the lovely space. I joined them, and was very glad I did. 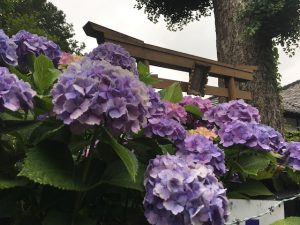 The flowers there were even more amazing, in color and size, than the thousands of other hydrangea bushes growing around the grounds of the shrine–and that’s saying something, because all of the plants were truly spectacular. 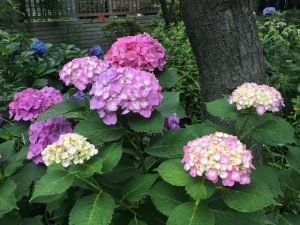 After spending a lovely (if slightly drizzly) morning among the flowers, I hopped another train to the south end of Tokyo for lunch with my friend Claire Youmans, author of The Toki-Girl and the Sparrow-Boy books – a fantastic historical fantasy series set in Meiji-era Japan. 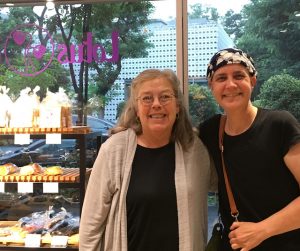 It’s fantastic to have a good friend here in Tokyo!

I’m hoping to get back to the mountains later this week, if the weather permits. (We’ve had a little typhoon blow through Tokyo over the last few days.) If not, I’ll be heading out early next week – so check back soon. The adventure is just beginning.

Do you like hydrangeas? Which color is your favorite?

2 thoughts on “The Hydrangea Festival at Hakusan Shrine”