Taiyaki – a kind of filled pancake–are one of my favorite traditional Japanese treats. 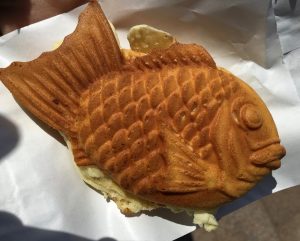 The fish-shaped cakes are easy to find–there’s a taiyaki vendor on the approach to many of Japan’s Buddhist temples and Shinto shrines, and every festival has a taiyaki stand. Traditionally filled with sweetened adzuki bean paste or custard cream, I’ve also seen them filled with ice cream, chocolate custard, coconut cream, and jellies. 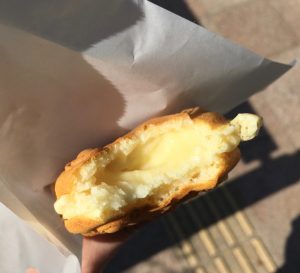 One thing they don’t contain is fish.

During my first trip to Japan I saw them, but didn’t try them because I wasn’t sure whether or not they were safe for a person with fish allergies to eat. (They looked just fine, but I was afraid to show my ignorance by asking, and I exercise caution where allergies are concerned.) After returning home, I mentioned taiyaki to my son, who found it intensely amusing that I hadn’t eaten one–and disabused me of the erroneous notion that these popular traditional cakes contained any fish.

I love food history, especially when it comes to Japanese food (hence, my minor embarrassment over not knowing these cakes were safe to eat at first), so even before my return to Japan I set out to investigate the history of this tasty treat. 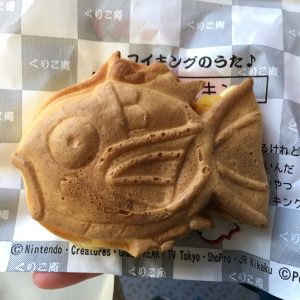 The custard cream ones are my favorites, and though I’ve tried other flavors, I keep coming back to the luscious, sweet cream–in many cases, served warm and freshly baked. Irresistible!

Have you ever tried taiyaki? If so, which filling to you like best? And if not – what’s your favorite pastry treat?

3 thoughts on “The Fish That Isn’t: Taiyaki”