One of my favorite aspects of Japan, and Japanese culture, is the constant possibility of discovering something unexpected.

If you keep your eyes (and mind) open while traveling in Japan, you will discover a multitude of fascinating things to see, do, eat, and experience, many of which may take you by surprise.

While visiting Fushimi Inari Taisha (Shrine) I climbed the path up Mt. Inari, following the pilgrim route to the shrine at the very top of the mountain. Along the way, the “normal path” passes through a variety of stations, sub-shrines and places where visitors can stop to worship or enjoy a cup of tea. Most of these stopping places sit directly on the path, where visitors can’t miss them. 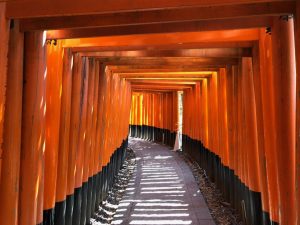 However, not every special place on Mt. Inari reveals itself so easily.

Just past the first of the major sub-shrines, at the point where the route begins to climb in earnest, an unmarked dirt path branching off from the torii-lined route.

The path seemed frequently traveled, and the torii opened around it, indicating that it wasn’t forbidden, but no one before me on the trail had left the primary route to explore it. I hesitated for a moment, stepped off the “road more traveled” and started up the earthen path. After about an eighth of a mile, the pines gave way to a magical, old-growth bamboo forest. 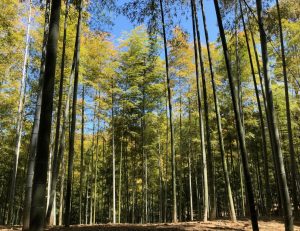 Nestled between the trees and the bamboo grove sat a beautiful, silent shrine: Fushimi kandakara Jinja.

The approach to the shrine–which, like Fushimi Inari itself, was clearly shinto in nature–featured unpainted wooden torii far simpler than the grand, red-painted ones that adorned the primary pilgrim road up the mountain.

A narrow path led around the shrine, through a lovely garden filled with dragon statues: 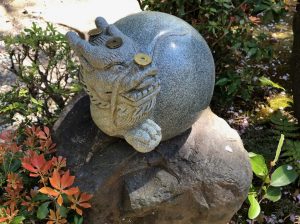 Dragons play an important role in Shinto: Ryūjin, the dragon god of the sea, controls the ocean, and dragons are also linked to agriculture, crops, and rain (making a dragon sub-shrine logical on the grounds of Fushimi Inari, whose primary deity is the god of agriculture, fertility, and rice).

I spent about twenty minutes appreciating the shrine and its dragons (some of which I did not photograph, due to the fact that they appeared on altars and in very holy places that I choose not to capture, out of respect for the shrine). During that time, I saw only two other people–a Japanese couple who arrived as I was leaving.

The experience was one of the most special, and memorable, that I had in Japan, largely because of its unexpected nature. 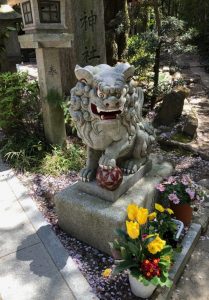 When traveling–in Japan or anywhere else–take time to consider the road less traveled, and keep yourself open to new experiences (while keeping safety in mind, of course). Sometimes, the most important thing you see is something you never even realized was waiting there for you to find.