The Japanese term mizuko (literally, “water child”) refers to a deceased baby, infant, or fetus. This includes stillborn and miscarried children as well as those who died by abortion, and in some cases also applies to babies that die shortly after birth.

A funerary rite, called mizuko kuyō, is often performed on behalf of these children, and Japan has many shrines honoring mizuko–mostly in combination with statues of Jizō, a kind incarnation of the Buddha who is considred the patron and protector of mizuko. 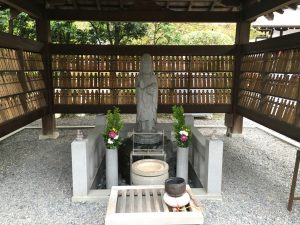 The shrine sits within the Mizuko-Kannon Do, a covered “hall” beside the temple’s bell tower and across from the famed five-story pagoda. It features plaques with donors’ names surrounding a simple altar with a statue of Kannon holding a young child. 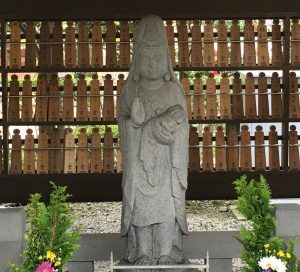 Kannon’s right hand is raised in the mudra of peace, and her left cradles the child with loving care. 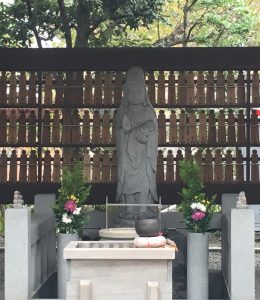 The slat-topped box at her feet is designed for offerings–coins rattle across the slats as they fall into the box, alerting the goddess to the offering and the donor’s prayers– while the vases on each side hold flowers that the shrine refreshes every day.

This Kannon shrine is small, and visitors often overlook it in favor of larger, more clearly identified structures like the bell, the pagoda, and the massive worship hall with its elaborate, many-armed Kannon. However, this Kannon has great meaning to families of mizuko, many of whom come here to pray, leave offerings, and seek solace for the pain of a loss that is nearly unimaginable to people who have never lost a child. It’s also fairly unique among mizuko shrines, because so many are dedicated to Jizō–so if you ever find yourself at Kiyomizu-dera, be sure to stop by and see this unique and peaceful little shrine.