On December 14, 1702, the 47 loyal retainers of Asano Naganori, lord of Ako, avenged his death by killing another samurai, a court official named Kira Yoshinaka–whose behavior caused their lord’s death almost a year before.

The event, which became known as the “Ako Incident” (赤穂事件 Akō jiken) remains an influential part of Japanese culture and history. Under the title Chūshingura, the Ako Incident has been fictionalized in numerous Japanese plays, films, and other works of art – and the story has also inspired Western works in multiple genres.

Both the lord of Ako and his 47 loyal retainers are interred at Sengakuji, a Buddhist temple in Tokyo. 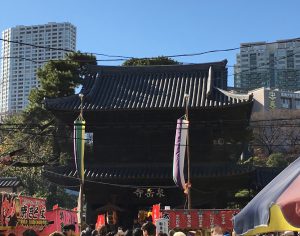 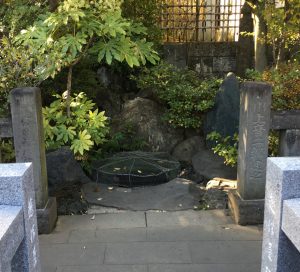 (After completing their vengeance, the 47 ronin brought Kira’s head to Sengakuji and presented it to their lord’s grave after washing it in a well — now called the “Head-Washing Well”–that remains on the grounds to this day.)

Each year on December 14, Sengakuji commemorates the bravery and loyalty of the 47 loyal retainers (often translated into English as the 47 rōnin) with a matsuri, or festival, in their honor.

Hundreds of people visit the temple and wait in line to pay respects at the graves of the 47 samurai. 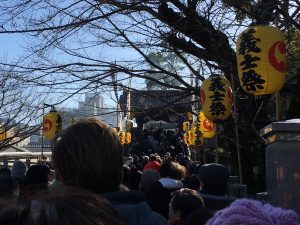 The line took about an hour from the place where I took the photo above – but the experience was worth the wait. We stood together, silently, as a brisk 48-degree breeze set the banners rippling and carried drifts of fragrant incense through the clear, December air. Slowly, we shuffled forward as the line progressed, until we reached the cemetery gate, where a priest sold bundles of incense sticks for 100 yen (about $1) each.

Many visitors purchased incense (I did too) to lay on burners at the graves as a sign of respect.

The line wound slowly through the graveyard, past the gravestones of the 47 loyal samurai. Flowers – and sometimes candies, sake, and other offerings adorned the graves. 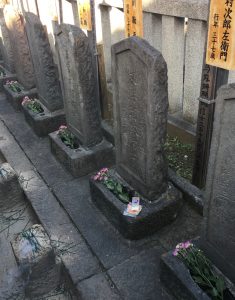 Piles of incense sent up clouds of fragrant smoke that drifted slowly through the air. 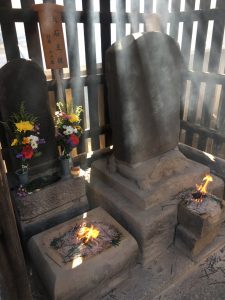 Despite its size, the crowd was silent, prayerful and filled with respect for the bravery of these loyal samurai–heroes still, despite the centuries since their deaths.

Once past the graves, the festival atmosphere returned. Laughter and happy conversation filled the air, along with the scents of grilling meat, roasting sweet potatoes, and other fragrant treats.

If you find yourself in Japan on December 14, consider taking the time to visit Sengakuji — it’s impossible to miss the respect for history, and these loyal men, that fills the temple and its visitors that day.

Have you ever visited Sengakuji? Or heard the story of the 47 loyal retainers?