After my rainy climb of Mount Ibuki, I hopped a train to Kyoto, and then an hour south to Nara Prefecture (the home of the ancient capital city of Nara, but also many even more ancient historical sites – as well as mountains). The following morning, I traveled even farther south, to  Dorogawa Onsen (an onsen is a Japanese hot spring resort) and Omine-san, one of Japan’s most sacred peaks. 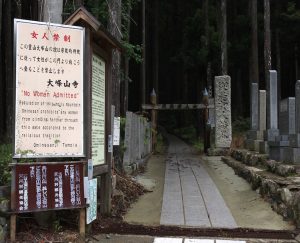 It remains so sacred, in fact, that women are not allowed to climb it.

Although the idea of banning women from places men can go raises many issues (and validly so) for many modern people, it didn’t offend me that I needed to take my “summit photo” for Mount Omine at the trailhead, instead of on the peak. 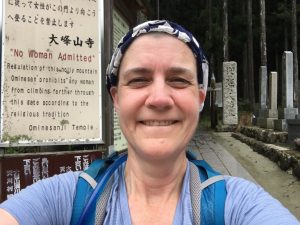 Mount Omine is a place where devout (male) Buddhists go to perform certain rites, including standing naked under waterfalls. The entry of women into that sacred space would change the character of that religious practice. While I might feel differently if Buddhists (or anyone else) wanted or expected me to adhere to religious beliefs that are not my own in my daily life, I also respect people’s right to worship in accordance with their beliefs (with the caveat that I don’t think that also grants the right to impose their religious beliefs on others’ lives). 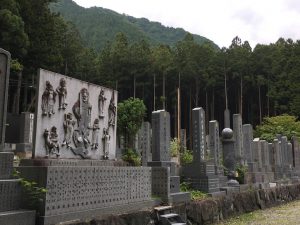 (Note: There was no one at the temple near the Omine trailhead to prevent me from hiking onto the mountain, had I decided to do so. No one stands there and tells women to go away. But for me, it’s just as important to respect–and learn from–the sites I visit on this #100Summits journey as it is to stand atop a hundred peaks. For that reason, I made the choice to leave the sacred mountain without crossing the proverbial “Great Seal.”)

Women are allowed to hike the 5 kilometer trail from Dorogawa Onsen to the trailhead at Mount Omine, and I made that hike (both ways) – which follows the Tenkawa (the “River of Heaven”) through a beautiful sacred forest. 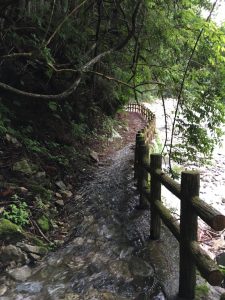 Near the trailhead, I saw this lovely fungus – a “gift of the day” that I wasn’t expecting, and that made me glad I put in the effort to hike to the base of the mountain even knowing I could not climb. 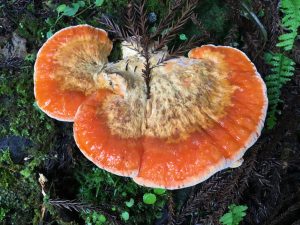 After hiking to the trailhead and back, I spent the rest of the day hiking through the Tenkawa Gorge – a spectacular hike that rates among the most beautiful places I’ve ever been – and I’ll post photos from that hike in the weeks to come