This morning, I braved the rain in Nagahama (just north of Kyoto) to attempt a climb of my ninth hyakumeizan, Ibukiyama (Mount Ibuki: 伊吹山). At 1,377 meters, Ibukiyama is the highest mountain in Shiga Prefecture, and one of four hyakumeizan in the Kanto region. 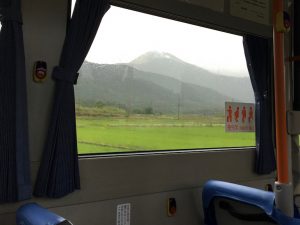 The climb started inauspiciously – with pouring rain – and my first sight of the mountain towering high above the surrounding plain gave me more than a little pause. Even so, I was already on the bus to the trailhead, and my research suggested the mountain would not be too difficult to climb in the rain.

Lesson 1: Don’t trust the research, especially when it comes to rain. 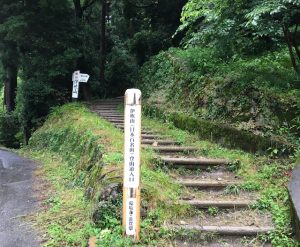 The climb began with a pleasant, if steep, hike through a forest. The trees blocked most of the rain, and I quickly sweated rivers inside my goretex jacket and rain pants.

Soon after leaving the trailhead, I ran across the first of several interesting mountain creatures: a small brown frog, who tried to impersonate a rock, giving me time to snap his photo before he hopped away. 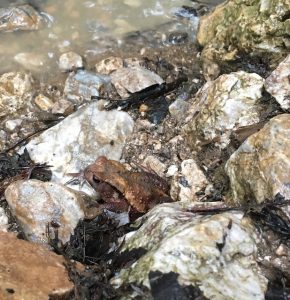 After about half an hour, the trail emerged from the forest at the base of the ski slopes–now abandoned–that once operated on Mount Ibuki during the winter months. Fortunately, by this time the rain had slowed to a mist. 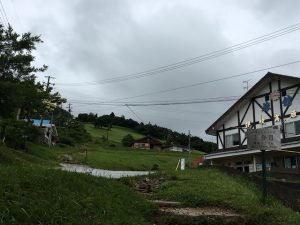 The trail continued up the mountain, following the slopes – with derelict ski lodges and lifts along the way. 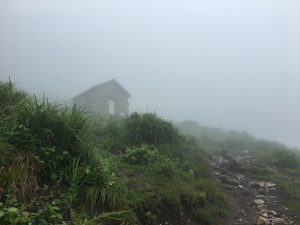 Because that’s not creepy. Not at all. Especially in the rain.

Another hour’s climb up the slopes, and I reached the fifth station, where the trail changed yet again–this time, to a series of increasingly steep and rocky switchbacks that continued all the way to the peak.

Did I mention, it started to rain again? It did . . . and the water pouring down the mountain created a river along the trail–a river periodically lined with some of the largest earthworms I’ve ever seen. Seriously – here’s one beside my hiking boot for scale: 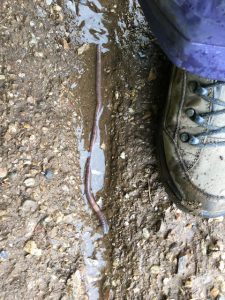 As I continued ascending, I began to worry a little about the wisdom (read: safety) of descending along the trail, especially because the only bus back to Nagahama station left the trailhead at 3:25pm. I simply wasn’t sure I’d have time to reach the bus without endangering myself–and as the rain continued to fall even harder, and the winds kicked up near the peak, I realized any descent in this weather would be dangerous. 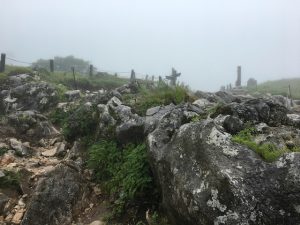 Fortunately, Mount Ibuki has a trail up one side and a road up the other, and buses that run from the visitor center to Sekigahara Station – so by the time I reached the eighth station (about 30 minutes below the peak) I had decided to catch a bus back down instead.

The last half hour of climbing merely reinforced that decision – between the wind and the rain, I had no desire to risk the climb back down.

Unfortunately, I arrived at the summit only to find the gate across the last 60 meters of the trail (and the official high point of Mount Ibuki) . . . locked. I couldn’t get through. Which means I climbed the entire mountain but couldn’t snap a photo with the actual summit marker because the summit was off limits today. 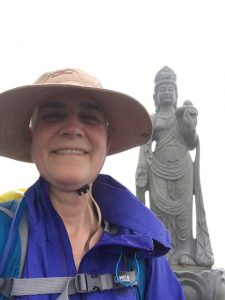 Instead, I hiked around to the visitor center and snapped a photo with the Kannon statue at the high point there. (I’ll return to Ibukiyama this year, to grab the last few feet of trail, but for the moment, considering that I managed the entire ascent to the reachable high point in the rain, I’m counting this as a successful ascent.)

Oh – and the buses to the visitor center were also cancelled today because of rain, so I ended up taking a pricey but well-worth-it taxi from the summit to Sekigahara Station, with a short detour to the site of the Battle of Sekigahara.