The Golden Pavilion, Kinkakuji, ranks among Kyoto’s most popular attractions, though many visitors know little about the temple’s history or architecture. 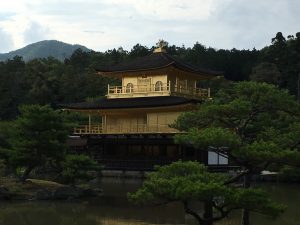 The Golden Pavilion stands beside a peaceful, reflective lake, surrounded by Zen landscape gardens. It has three stories, each of which holds different treasures and features a different architectural style. 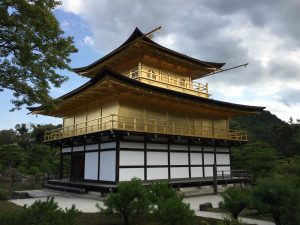 The ground floor, built in the style of Heian-era (794-1185) court nobility, holds two statues: one of Sakyamuni (also known as Buddha) and the other of Shogun Ashikaga Yoshimitsu (1358-1408), who constructed the villa (including the pavilion) that ultimately became known as Kinkakuji.

The second floor mirrors the housing style popular among samurai warriors of Shogun Ashikaga’s time (the 14th century). It houses a statue of Kannon, the goddess of mercy, as well as statues of the Four Heavenly Kings.

The pavilion’s third, uppermost floor is built in the Zen temple style. It is reputed to hold the ashes of Sakyamuni. Perched atop the sloping roof, a legendary golden phoenix (Hō-ō) watches over the pavilion and its grounds.

In Japanese lore, the phoenix appears to mark the beginning of a new era or as a herald of peaceful, prosperous times. In this context, the bird is a harbinger of peace.

The multi-era construction techniques used in the pavilion are rarely seen within a single structure, making Kinkakuji even more fascinating and unique. I love Japanese architecture (shrine and temple architecture in particular), and I could spend hours staring at the pavilion’s lovingly restored details. (This version dates only to 1955; the original, 14th century version was damaged by fire in 1950. However, the current version was restored on the original plans, down to the smallest details.)

One last fun fact: the golden parts of the building are actually covered in real gold leaf–a detail that’s easy to recognize because only real gold does not darken or tarnish over time.

What’s your favorite style of architecture? And what do you think about covering an entire building with gold?