Kinkakuji ranks high among Kyoto’s most popular tourist sites, and with good reason. Its famous golden pavilion, which stands on the edge of a peaceful lake, is a lovely and well-maintained example of Buddhist architecture. 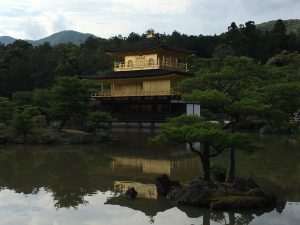 But many visitors don’t realize that “kinkakuji” (temple of the golden pavilion) is not actually the temple’s real name.

The temple buildings date to the 14th century, when the third Ashikaga Shogun, Yoshimitsu, built a villa (called Kitayama-den) at the location. After the shogun’s death, the villa became a Zen Temple known as Rokuonji (a name based on Shogun Ashikaga Yoshimitsu’s posthumous Buddhist name), and that remains the temple’s official name to this day. 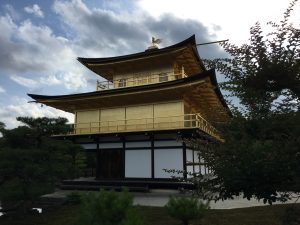 However, the golden pavilion became so famous that the temple became colloquially known as Kinkakuji, and this popular name overtook the official name almost completely.

The far side of the lake is one of the most popular selfie spots in Kyoto, if not all of Japan, and I admit  my son and I succumbed to the pressure when we visited (me for the first time, him for the third) last summer. 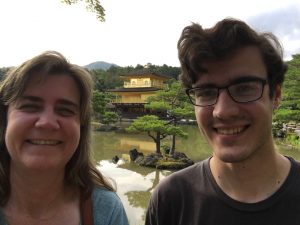 I’ll share more about the pavilion’s architecture on Friday – I hope you’ll come back and join me then for more details about this beautiful and famous site!