Last week I braved the 90-degree temperatures in Kanagawa Prefecture (south of Tokyo) to continue my 100 Summits journey with a “station to station” hike that included a traverse of three different mountains: Sangenyama, Gongenyama, and Kōbōyama. 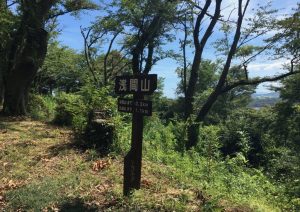 Since these three peaks are separate mountains, rather than a single “compound peak,” they count as three toward my 100 Summits Project goal and bring the current total to 22. (The August heat has slowed me down, largely for safety reasons but also because I’m working on finding a long-term rental apartment, which is challenging in Japan when you have a cat! But I digress…)

“Station to Station” hiking involves departing from one train station, hiking a peak, and returning, or hiking from one station up and across a mountain (or, in this case, several mountains connected by a ridge), and down the other side to a different station. It’s a great option when you don’t have a car and don’t want to break the bank on a taxi (or wait for a bus to the trailhead).

My hike began at JR Hokusō station in Kanagawa Prefecture. I enjoyed the 20-minute walk from the station to the trailhead, despite the blazing midday sun and lack of shade, because of the breezes coming off the river. 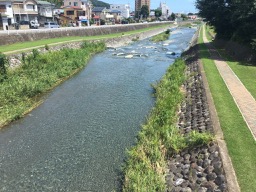 As I walked, I saw the first of the mountains–Sangenyama–rising up beyond the houses. 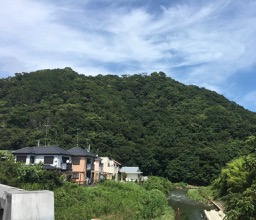 A couple of minutes later, the trailhead showed up at the side of the road, essentially “out of nowhere.” 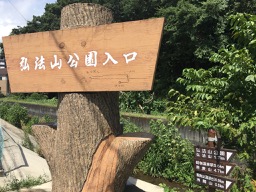 And within a minute after that, you’d never know I was less than ten minutes’ walk from a station.

The trail up Sangenyama switchbacked through mixed forest of maples and other deciduous trees, with familiar bamboo grass underbrush sprouting up along the path. 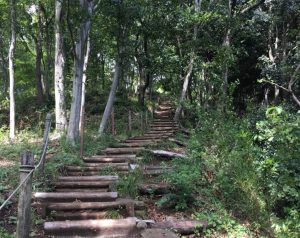 Cicadas screeched and rattled in the trees, competing with the calls of crows and the occasional songs of other birds. For the most part, though, the heat meant the forest belonged to the bugs and crows. About halfway to the peak, I saw a giant wasp flying along the trail, carrying a dead cicada’s body. The wasp didn’t seem to be struggling, either, despite its heavy burden.

Normally, I stop to shoot photos of anything interesting on the hike. I consider these moments “gifts of the day” and want to record them so I don’t forget. (They’re actually far more numerous than I would have anticipated before I started the 100 Summits Project, and it’s special to have the photographs to help me remember.) However, since I’m allergic to bee and wasp stings, I hurried along my way and left the wasp to his morbid task.

Half an hour later, I stood on the summit of Sangenyama, and enjoyed the view of the mountains that separate the Odawara area from Hakone. 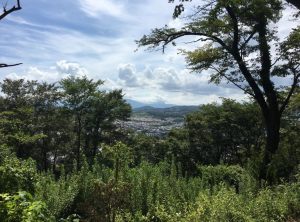 From there, I continued along the ridge to the summit of Gongenyama, a taller peak but one that sits at the end of another pleasant half-hour hike along a shaded ridge. 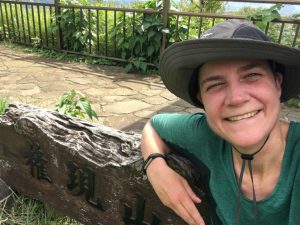 The heat had become even more intense as I hiked, and I reached Gongenyama’s summit soaked in sweat and ready for a rest. Fortunately, there’s a lovely pagoda-shaped gazebo with picnic tables and an observation tower at the top of Gongenyama, so I stopped for some senbei (rice crackers – the ones I had were crispy and topped with yuzu and crystal sugar) and water from my pack.

An aside about hiking gear: I love my Camelbak day pack (I call it “Blue”). Its 3-liter reservoir keeps water cool even in the heat, which is great when you’re sweating from places no human should be allowed to sweat and need to replace the liquid your traitorous pores have used to soak your clothes. 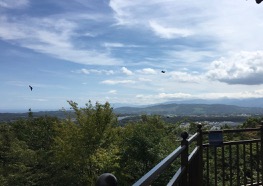 While resting atop Gongenyama, I watched a flock of crows soaring and swooping overhead. They called to one another, did loop-the-loops, and flew with their feet dangling downward into the breezes, like a group of children playing in the surf. The photo above doesn’t do justice to either the crows or the view, but it’s the best I could manage, so it’ll have to do.

After 25 minutes on Gongen’s summit, I packed up my gear, shouldered Blue, and started off for my final summit: Kōbōyama. I hope you’ll join me Wednesday for the journey, and the photos from that climb!

Do you exercise in the heat, or do you prefer to stay indoors?