Two weeks ago tonight I arrived in Hokkaido, just two days after a massive earthquake rocked Japan’s northernmost island, killing over two dozen people, knocking out power, and interrupting public transportation. I considered cancelling my trip–which I’d had planned for almost a year–but the guides at Hokkaido Nature Tours said we were good to go . . . and go we went. 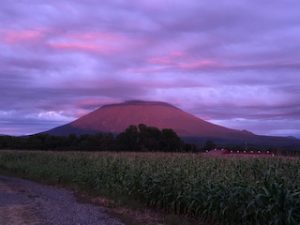 My first guide, nicknamed Yamabushi (the Japanese word for a mountain ascetic) met me in Sapporo and drove me to Niseko, where we arrived just in time for a couple of afternoon adventures (more on that in a later post) and to watch the sunset light Yōtei on fire with alpenglow.

After a delicious dinner (Japan has some of the best Indian food anywhere, and Hokkaido is no exception) and a good night’s sleep, the Yamabushi and I woke early and headed for the mountain.

The trailhead at Mt. Yōtei includes a box with a folder where hikers file hiking plans–a common sight across Japan, where hikers are expected to note their names and intended routes before departing. 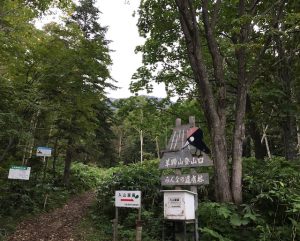 Yōtei is an active stratovolcano–a volcano built up over time by layers of lava, ash, and other erupted materials. Like others of its kind, Yōtei has a distinctive conical shape. In Japan, that shape is most commonly associated with Mt. Fuji, and Yōtei is sometimes known as Ezo Fuji (Ezo was the original name of the island now called Hokkaido).

The trail up Yōtei doesn’t have the same ups and downs as many Japanese mountains. Instead, it switchbacks upward through the forest. 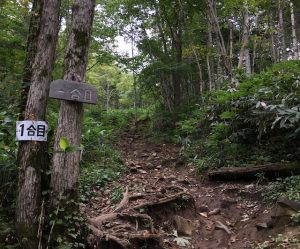 Like many Japanese mountains, Yōtei has station markers, numbered one through ten, that divide the hike into ten elevation-based segments of equal length. (Each station marks a uniform amount of elevation gain – so they’re not always spaced evenly along the trail in terms of walking distance.) These markers help hikers gauge progress, and are useful for estimating distances on the trail.

They’re also disheartening at times . . . but I digress. 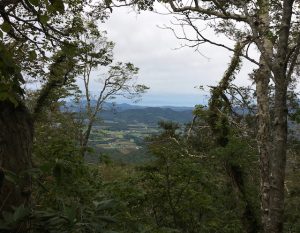 By the third station, the views began to appear. The portion of Hokkaido near Mt. Yōtei has many farms, including dairy farms, and the grassy fields made a lovely patchwork spreading out beneath us as we climbed. 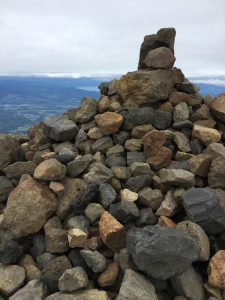 Many Japanese mountains have cairns–piles of stones built up by hikers, who leave them on the pile as they pass. On every mountain I climb, I leave a stone and prayers on a cairn on behalf of someone I know who may never make it to the summit of Japan’s high peaks.

At the summit crater, the Yamabushi pointed out the spot where he dropped in on his snowboard two winters before . . . after carrying the board up the entire mountain on his back! He snowboarded into the crater, hiked back out, and then snowboarded down the entire face of the mountain. (If you’re wondering, it’s on the far side of the photo above.) 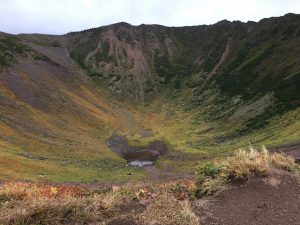 We also snapped some photos, even though we hadn’t reached the summit yet. 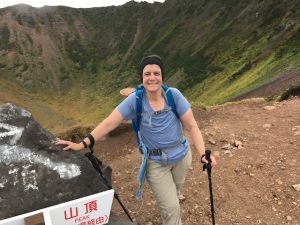 The true high point lay across a rocky ridge, almost halfway around the crater rim. As we approached, the clouds descended and the wind began to blow. 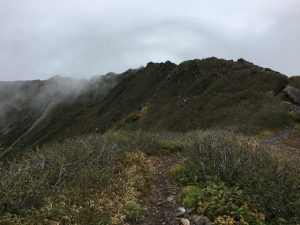 Although we had some scary moments along the way – a few of which I’m saving to share in my upcoming book, 100 SUMMITS, we made it to the top. I was proud of myself for fighting through my fears and refusing to turn back–and grateful to my guide, the Yamabushi, for encouraging me to push myself and improve as a hiker. 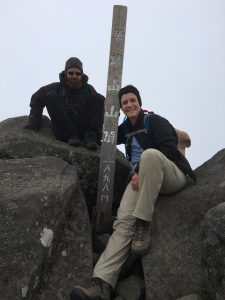 After a short break for photos and snacks, we began the hike back down – and made it, which you probably guessed, because otherwise you wouldn’t be reading this right now. That story involves headlamps, giant moths, and the Milky Way . . . but that’s a tale for another time.

Although my time in Hokkaido will soon draw to a close, I have many adventures to share–and summits to celebrate–in the weeks to come!