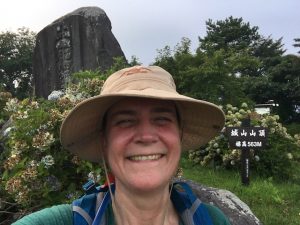 The mountain takes its name from the castle that once sat atop its peak. (“Shiroyama” means “Castle Mountain” in Japanese.) Although only scattered ruins and a monument on the summit remain to mark the spot today, during the 12th century Yugawara (then called Doi-go) and its castle were home to the Doi samurai clan.

In 1180, the Doi concealed Minamoto no Yoritomo and his retainers during their flight from a rival samurai after losing the battle of Ishibashiyama. The cave where Yoritomo can still be found on the slopes of Shiroyama.

I started my hike at Joganji, the official temple of the Doi clan and home to an 800 year-old Chinese juniper planted by Sanehira Jiro Doi, the samurai who concealed the fleeing Minamoto warriors. 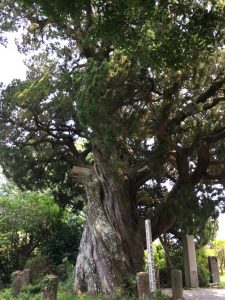 From there, I hiked uphill through sweltering 94-degree heat (and humidity so high it felt like walking in a sauna) along a steep, paved road past orange groves and houses. I took a wrong turn initially, which added a good 20 shadeless minutes to the trek. (It added 20 minutes, anyway – on second thought, there wasn’t much good about them!)

I almost quit this hike before I even reached the forest trail. The extreme heat, humidity, and lack of breeze (despite the mountain sitting in clear sight of the ocean) made me worry about heatstroke. I didn’t see any other hikers on the trail (pro tip: at 94 degrees, most people know to stay inside) and had concerns about collapsing from the heat with no one around to help.

Ultimately, I decided to continue, on the condition that I would turn back if ran short on water, felt the beginning of heatstroke, or had any other problems on the trail. 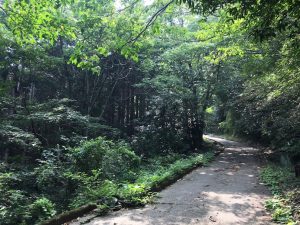 Not five minutes later, I reached the forest and the shady part of the trail, which continued all the way to the mountain’s summit. Bamboo groves rose up on both sides of the forest road–old stalks as thick as my hand is wide. On the upper slopes towering conifers replaced the bamboo. Sunlight filtered through their branches and dappled the path around me. 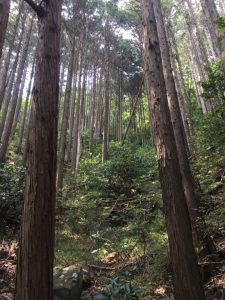 Although I hiked alone, the forest was far from silent. A riotous cacophony of cicadas, birds and tree frogs filled the air, as if the different creatures were competing to see who could make the biggest racket. Spoiler alert: as always, the cicadas win. 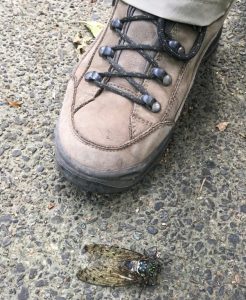 Japan has many species of cicada–most of them enormous, as the photo shows. 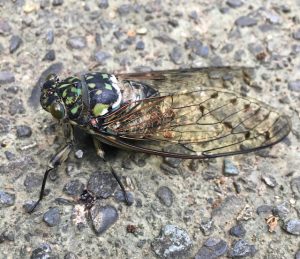 It took me almost three hours to reach the peak, but I stopped and rested several times to bring my body temperature down. I drank almost three liters of water on the trail–and it felt like I sweated out twice that much, though obviously that isn’t really true. I reached the summit just as clouds rolled in, obscuring the view of the ocean and the coast. 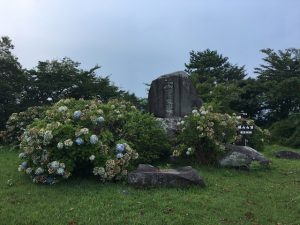 The descent took only an hour – largely because the clouds reduced the temperature by ten degrees and made the hike back down a pleasant walk through the darkening woods. I passed a creepy cabin: 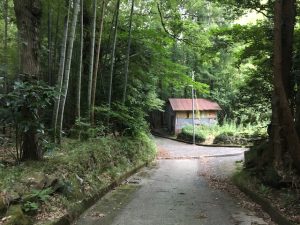 …and a large, rusted steel trap baited with melons and squash that made me hurry on my way. 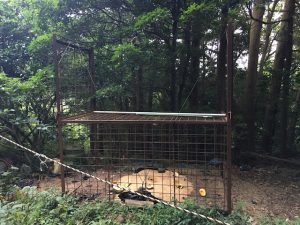 I don’t know what it’s there to catch (most likely a bear) – but I know I didn’t want to be there when whatever it was arrived.

Despite the heat (and the lack of view from the summit) Shiroyama was worth the climb. I learned that I can hike in conditions that would have sent me fleeing for an air-conditioned room a year ago, and the forested slopes were beautiful, both in the sun and as the mist rolled in.

Do you like to hike in the heat, or would you rather spend a summer day with shaved ice at the seashore?