Although my original 100 SUMMITS project involved climbing “only” the nihon hyakumeizan, a lot of Japan’s most famous, sacred, and beautiful mountains did not make the “Hundred Famous Mountains” list. Since I’m in Japan for the purpose of learning and experiencing as well as climbing, I’ve decided not to limit myself to hyakumeizan peaks. If there’s an important mountain in the area, I’ll try to climb it, too. 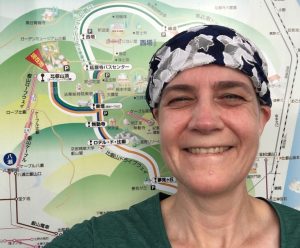 The first of these “bonus mountains” was sacred Mt. Hiei, in Otsu (just outside Kyoto).

Mt. Hiei is home to Hieizan Enryaku-ji, a Tendai Buddhist temple established on the mountain’s slopes by Saichō, the Japanese monk who founded the Tendai Buddhist sect in Japan. Enryaku-ji has functioned continuously since that date. Today, it welcomes not only religious pilgrims but also secular visitors, either for the day or to stay overnight at Hieizan Enryakuji Kaikan, the shukubo (temple lodging) on the temple grounds.

I spent the night at the temple–and highly recommend it if you’re in the Kyoto area and have the time. The rooms are lovely and the food–all shojin ryori, or Buddhist temple cuisine–is some of the best you’ll find in Japan. (I’ll blog about that experience in the weeks to come.)

I originally planned to climb the afternoon I arrived, but a thunderstorm prevented me from hiking that afternoon. Since I see the mountains as something to be approached with reverence rather than “assaulted and conquered,” I accepted the setback and spent the afternoon writing, reading, and meditating.

Since I needed to leave for Koyasan by 9am the following morning, I rose at 4:30–and to my delight, the rain had departed, leaving a lovely misty morning in its wake. By 5am I was hiking upward through the misty temple grounds: 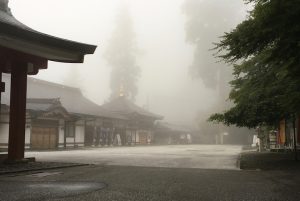 And past the “wishing cow” that supposedly grants the prayers of those who rub its nose. (While not a believer in bovine grace, I did rub the nose and offer a prayer to the God I do believe in, asking permission to reach the summit.) 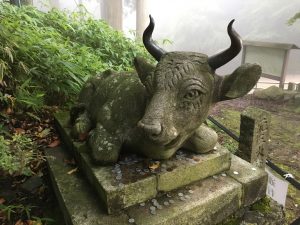 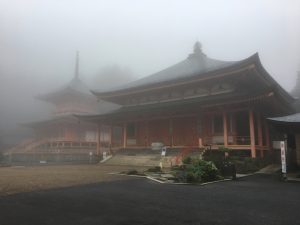 Just behind them, a set of stairs climbed up to the mountain trail. 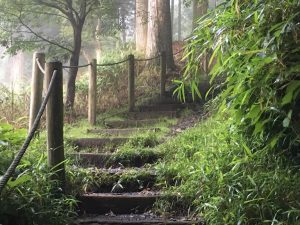 The previous night’s rain left the trail soggy but not mushy. Fortunately, even the steepest slopes felt stable underfoot. (Had they not, I would have turned around. My climbing goals are not worth taking unnecessary risks.) 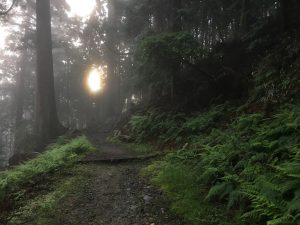 I reached the summit just as the sun rose over the trees on the ridgeline.

Given my 9am planned departure for Koyasan–and the fact that the temple served breakfast at 7, I snapped a couple of summit photos to document the climb and headed down. 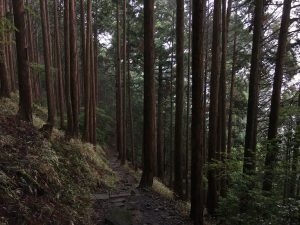 The mist closed in again as I descended. 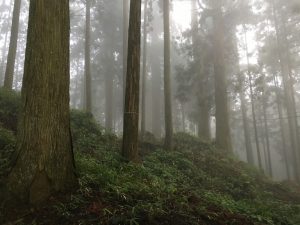 But lifted enough by the time I returned to the temple to offer this spectacular view from the dining hall: 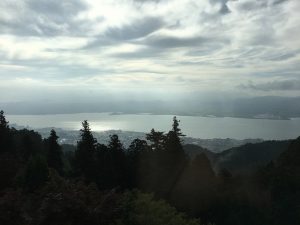 A wonderful place to have breakfast and celebrate another successful climb!

I think the shift from “hyakumeizan only” to “all famous, sacred, and historic mountains” adds great meaning to my climbs. Have you ever had a journey change on you while it was in progress? How did the change impact you?