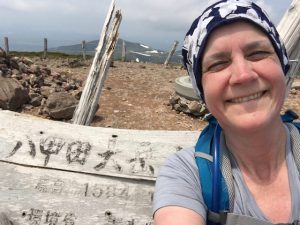 If you’re counting, that means I actually bagged three summits today, though for hyakumeizan purposes only Ōdake counts–and it counts as one.

I started my climb at the top of the Hakkoda Ropeway, via the loop hike route that starts at the visitor center, passes through a pair of circular nature trails, and then leads up to the summits of Akake-dake, Ido-dake, and finally Ōdake, via a series of up-and-down trails and saddle ridges. After leaving Ōdake, the trail loops around down the mountain and back up to the visitor center via a different path. 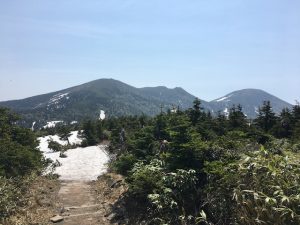 The nature trails offered a spectacular view of the three target peaks, along with other distant mountains still covered in snow. (Quite a lot of snow remained on Hakkoda, too – something to come prepared for if you hike in early June.)

After leaving the nature trail, I headed up a flight of stairs that had an Indiana Jones-esque vibe, more tropical than alpine in its temperature and foliage. 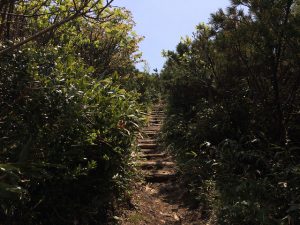 The alpine look returned as I emerged above the grasses, with a beautiful view of the surrounding peaks. If you look, you can see the visitor center–the tiny lump in the saddle of the ridge on the left side of the photo below, just to the left of the snow pack. 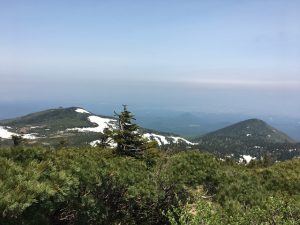 When I reached Akake-dake, I took my hat off for the summit photo–in part to show off my newly-grown fuzz (two months after the end of chemo, my hair is returning!) and in part to prevent the strong winds that screamed across the summit from ripping it off and blowing it halfway back to Aomori. 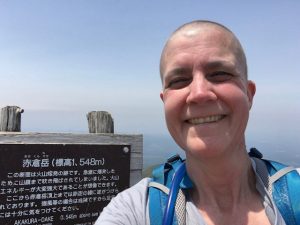 I love this hat. I wore it all through chemo, and I don’t want to lose it now.

After snapping a photo, I hiked along the ridge to the next summit (name unknown) where I found a small Shinto shrine and stopped to meditate and offer my own prayers. 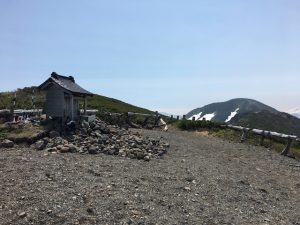 The winds remained high, so I hurried along another ridge to the next peak, Ido-dake. 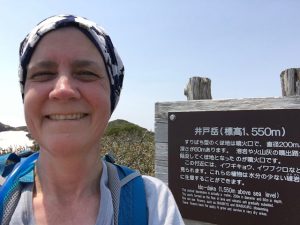 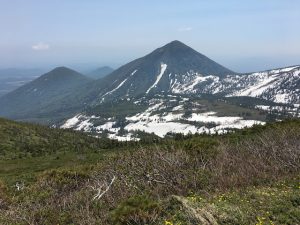 While I hiked this section, I sang songs from “The Sound of Music.” Wrong continent, but the vibe was there – the scenery was some of the most spectacular I’ve ever seen. Ido-dake also features a beautiful volcanic crater, created by an eruption long ago: 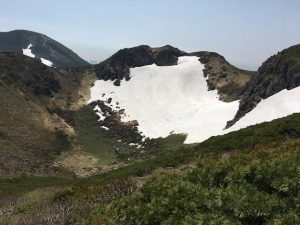 My singing ended abruptly when I reached the edge of another saddle ridge and saw the trail descending in a series of hairpin turns down the shoulder of Ido to the hut near the start of the summit trail to Ōdake. If you look carefully, you can see the hut and the trail curling up the right side of Ōdake. (What I didn’t realize at the time was that the large snow field you see above and left of the hut is *also* part of the summit trail. Yikes.) 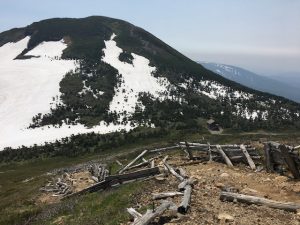 Since going back was not an option, I started down the trail. Fifteen minutes later, I reached the hut–home to the stinkiest squatty potty I’ve seen in Japan. (Though, admittedly, it’s still light-years nicer than the average gas station bathroom in the United States.)

No photos of the potty. Sorry/not sorry.

I took a break to eat outside the hut. While there, I noticed hikers descending the large snow field above the hut — and realized, to my horror, that the snow field (about the length of a football field and steeper than a 90-degree angle) was part of the summit trail.

As I started up, I was terrified – of the ascent, but even more that I’d fall coming down. I almost gave up and surrendered the summit. 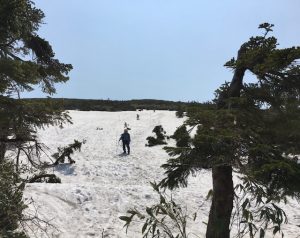 I stopped about where that first hiker is standing and seriously considered retreat. Everything in me screamed I could not make it. But I remembered my training. I had the right shoes, and a pair of carbon-fiber ski poles perfect for this test. Once again fear told me I would fail, but faith told me I would succeed. I trusted. I continued.

I made it to the top of the snow field, and onto the rocky slope that followed. 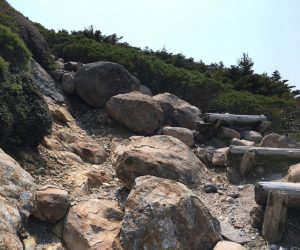 I didn’t stay long, because I knew I still had several miles of hiking left–and a gondola to catch before 16:20. (Japan uses a 24-hour clock, and so do I when I’m here.)

Descending the snow field, I moved slowly and carefully, striking each heel into the snow and giving myself a stable platform before I moved the next one. The descent was actually much easier than I expected–a good lesson about overcoming fear without being foolhardy. I assessed the situation, trusted my training, and took my time.

I also learned an important lesson: Fear is a liar. Do not let it keep you from your dreams.

From Ōdake, the loop hike descended along a trail that snow melt turned into more of a river than a path. 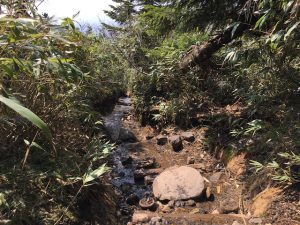 The trail also crossed a number of snow fields (I lost count after seven) — places where the hiking trail passed over the ski slopes that were still buried in several feet of snow. I didn’t take many photos because I was pressed for time (or thought I was – I actually returned to the visitor center with over an hour to spare) but the hike itself was amazing on many levels.

Most importantly: I conquered my fear and earned my summit pin.