Mount Koya (Koyasan) is a sacred mountain in Japan’s Wakayama Prefecture, about two hours south of Osaka. While researching my next Hiro Hattori mystery, Trial on Mount Koya, I spent time on the mountain and stayed in some of the temples there. 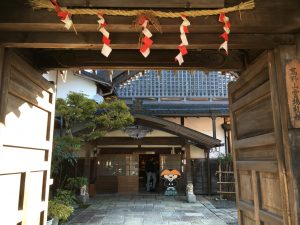 Today, I’d like to take you to breakfast with me at Kumagaiji, a Shingon temple on Koyasan that opens its doors to visitors of all nationalities (and faiths).

Like all Koyasan temples, Kumagaiji serves shojin ryori, or temple cuisine, a Buddhist style of cooking that is entirely vegetarian and also follows several other important culinary rules. (For more about shojin ryori, click here.)

The priests bring visitors’ breakfast to the guest rooms after the morning worship service (which ends by 7 or 8 am, depending on the season). When I returned from attending the fire ceremony, my tray was waiting for me: 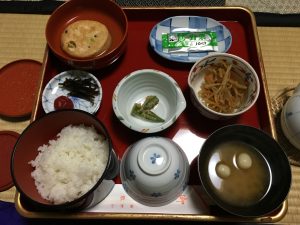 A typical breakfast features a number of delicious dishes, though many may initially seem unusual to American palates.

The dish in the upper left corner holds a tofu and vegetable cake. It may look odd, but it has a texture similar to an omelet, and a hint of natural sweetness. 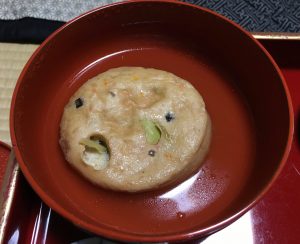 I look forward to eating it every time I visit Koya (though admittedly my adult son doesn’t like it as well as I do, so opinions vary).

The foil-wrapped package on the upper right is nori (seaweed), which most people break up and put into the vegetarian miso soup (in the lower right). 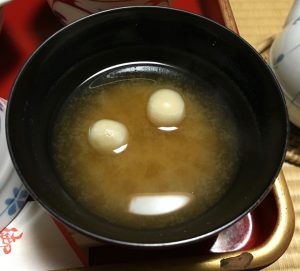 Unlike a lot of the other miso served in Japan, the kind prepared in Buddhist temples has no bonito flakes and is made with a fully vegetarian/vegan broth (no animal products of any kind are used in traditional shojin ryori dishes).

Between the miso and the seaweed packet, you’ll see a bowl of bamboo and carrot salad, a semi-pickled slaw that–like everything else on the tray–I find delicious. It’s light, tart, and refreshing, with a delightfully crunchy texture. 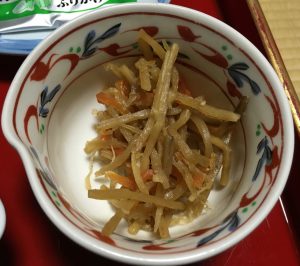 The bowl to the left of the slaw holds my least-favorite of the breakfast dishes: steamed okra. Regrettably (or possibly not) the coating on the okra doesn’t have a distinctive enough taste for me to determine exactly what it contains. 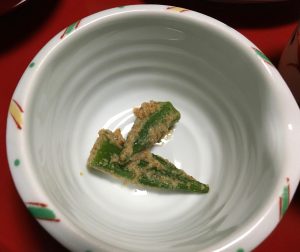 Texturally, however, the coating matches the okra . . . meaning both are slimy and stringy. Since I’m not a fan of okra, I tend to eat this one fairly quickly.

Left of the okra sits a bowl of tsukemono, or pickles–an item that appears in just about every traditional Japanese meal. 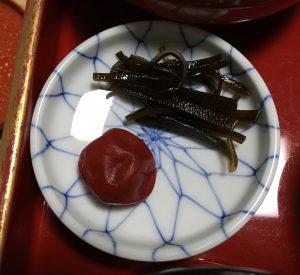 In the United States, “pickles” often refers to pickled cucumbers, but in Japan almost any vegetable can become tsukemono. At Kumagaiji (at least on autumn mornings–the menu changes seasonally, as do the pickles on the side), the offerings included a umeboshi (pickled plum) and pickled seaweed – both delicious.

Many people have to develop a taste for umeboshi. They’re mouth-puckeringly sour and extremely salty, and I admit I didn’t like them much at first–but that’s a story for another day.

Steamed rice and hot tea round out the meal.

Since many Buddhist priests eat only twice a day, the breakfast is both hearty and filling, more than enough to see you through whatever your day may have in store.

Have you ever eaten in a Buddhist temple in Japan? Would you like to? What do you think of temple breakfast?

4 thoughts on “Breakfast on Koyasan: A Meal at Kumagaiji”