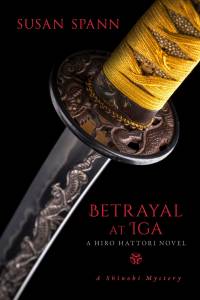 But when an ambassador from the rival Koga clan is murdered during peace negotiations, Hiro and Father Mateo must find the killer in time to prevent a war between the ninja clans.

“Spann once more shows herself as a master storyteller.”–CARA BLACK, New York Times bestselling author of the Aimée Leduc Investigations.