In between climbing mountains for the #100Summits project, I’m also visiting sites of cultural and historical significance across Japan. Yesterday, my husband and I hopped a shinkansen (bullet train) to Fukushima Prefecture–a little less than 250 kilometers–to visit one of Japan’s most unusual sanctuary/zoos: Zao Fox Village. 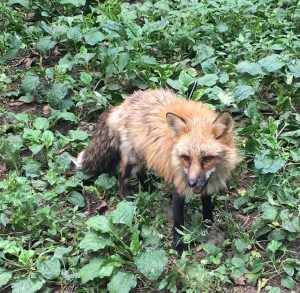 As the name suggests, the park is a combination zoo and sanctuary for foxes (known as “kitsune” in Japan). Among Japan’s most honored creatures, kitsune are considered messengers of Inari Okami, one of the most important deities in the Shintō pantheon.

In addition to their role as messengers of Inari (the god of rice, saké, fertility, and swordsmen, among other creative endeavors), kitsune are known as tricksters–a reputation that echoes the one they have in many Western countries, too. 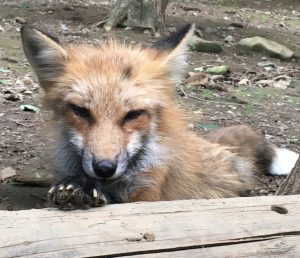 According to legend, Japanese foxes that live long enough grow multiple tails. They are able to shapeshift, and occasionally appear in the form of a beautiful young woman.

The foxes at Zao Fox Village were single-tailed, but lovely even so. 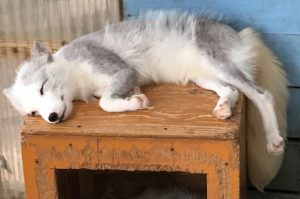 Since we arrived around midday, many of the foxes were sleeping, but a number were awake and alert – and curious about the visitors. 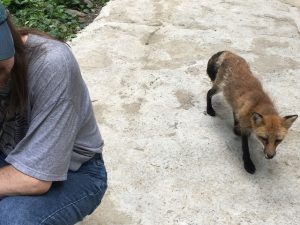 When you enter the main part of the park, you can walk around with the foxes–they aren’t chained or caged–and although the signs warn visitors about getting too close (and possibly being bitten) as long as you simply look, and don’t try to touch the foxes, the experience wasn’t dangerous. (At least for adults who know how to keep their hands to themselves.)

The park also had a number of other animals, including rabbits, guinea pigs, and goats–and at least one rather extraordinary toilet. 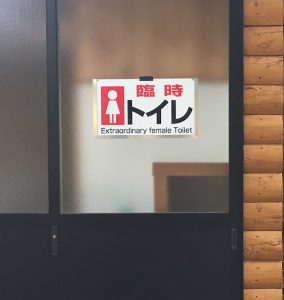 Sadly, I didn’t go inside. (Next time, I will, and I’ll let you know just how extraordinary that toilet is.)

At set times during the day, visitors can feed and even hold the foxes (for an extra fee). While my husband and I did not stay to hold them, we did feed the foxes (food is 100 yen, about 90 U.S. cents, per bag). Although some online reviews suggested that feeding time made the foxes fight, they didn’t fight while we were there. We did witness a few disagreements, and some barking, but it looked more like pecking-order issues–similar to what you might expect among dogs at feeding time–and it didn’t persist for more than a few seconds at a time.

Most of the time during feeding, the foxes looked more like this: 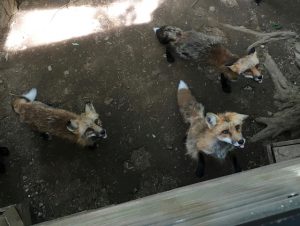 Quite a few of the foxes at the village were brought in sick or injured, and cannot be returned to the wild because they became acclimated to interacting with humans. Others were born there. There’s apparently a research facility at the village also, where they study the foxes and attempt to find a cure for fox diseases. 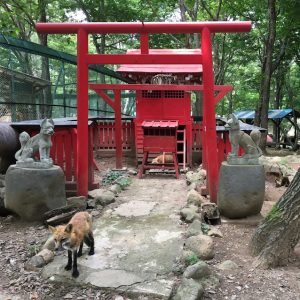 It was truly magical to get so close to such spectacular creatures. 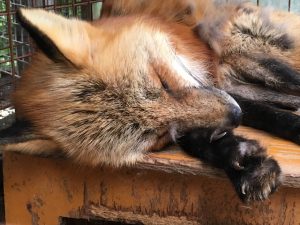 I can understand why they’re so revered, and so beloved, across Japan.

Have you visited Zao Fox Village, or other places where you can get close to wild creatures? Would you like to visit, if you could?

2 thoughts on “A Visit to Zao Fox Village (Fukushima, Japan)”