Hagoita are wooden paddles used in the traditional Japanese game of hanetsuki. Visually, the game is a lot like badminton, but without a net – players take turns batting a shuttlecock back and forth, using large wooden paddles (hagoita).

The game was traditionally popular during the New Year holiday, and though it’s not as popular now as it once was, decorative hagoita are available for sale throughout Japan. Each December, Sensōji–one of Tokyo’s oldest Buddhist temples–is home to the hagoita-ichi matsuri, a festival featuring vendors selling decorative hagoita in both traditional and modern styles.

The paddles vary from hand-sized creations to enormous wall-sized works of art: 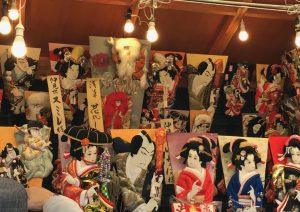 This year, the Sensōji festival takes place December 17-19. I spent the afternoon strolling through vendors’ stalls admiring the hagoita (I didn’t buy one, but admired many!) and eating a variety of festival foods. I’ll blog about those more on Wednesday, though here’s a tempting photo of something I tasted for the very first time this trip! 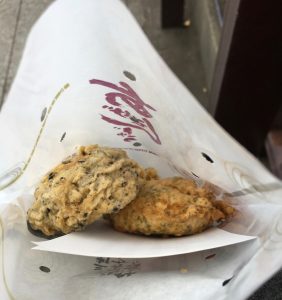 As usual, the temple grounds were crowded with happy visitors and vendors–although I normally prefer to visit temples at off-hours, I also enjoy the festival atmosphere and business of a matsuri. In fact, I made several visits to Sensōji this trip in order to visit when the temple was quiet as well as on festival day. I enjoy both experiences so much that I went back more than once.

Have you ever visited Sensoji – or another Buddhist temple — on a festival day? Would you brave the crowds to experience a matsuri?