Like many Shintō shrines in Japan, Nezu Jinja features a subshrine dedicated to Inari Ōkami, the kami (god) of foxes, rice, sake, fertility, swordsmiths, merchants, agriculture, and worldly success (among other things). There are over 10,000 Inari shrines across Japan — and with good reason, given Japan’s historical dependence upon rice as a primary source of food (and, at one time, as the measure of wealth as well).

Like all Inari shrines, the subshrine at Nezu Jinja has numerous carvings of guardian foxes watching over the precinct: 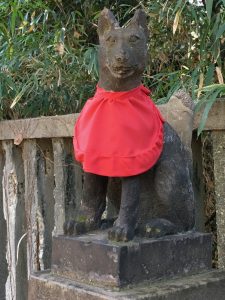 Many Inari shrines feature “tunnels” of closely placed torii–the traditional Shintō gates that mark the boundary between the rest of the world and a sacred space. The one at Nezu Jinja is no exception. Tunnels of torii stretch away from the shrine itself in both directions, requiring worshippers to pass through them on their way to the altar. 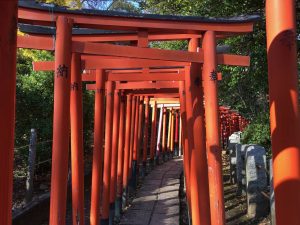 These torii stand less than six feet tall–I’m 5’6″, and I almost had to duck to pass through some of them.

In some places, the torii show wear: 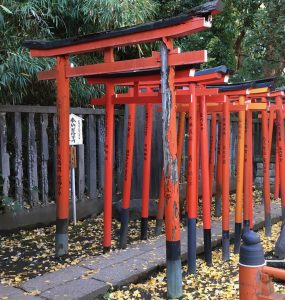 And in others, older stone torii stand between their wooden brethren. 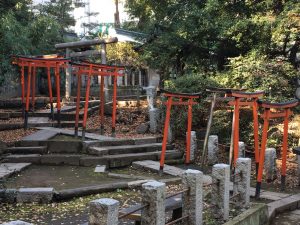 Nezu Jinja is fairly unique among Tokyo’s shrines and temples, because it survived the firebombing of the Japanese capital during World War II. Where most of the shrines and temples burned, Nezu Jinja’s buildings still date to the 1700s* – making this a rare example of Shintō architecture in Tokyo.

Have you visited Nezu Jinja, or any other Shintō shrine? Would you like to, if you found yourself in Tokyo?

*Shintō shrines are rebuilt every few decades, generally using the exact same plans, materials, and methods used for thousands of years. The rebuilding is a form of purification, and thus an “original” building might or might not be composed of the exact same wood, due to this regular rebuilding and renewal process, which is an important part of Shintō faith and practice.