Originally constructed in 1593 on the order of Toyotomi Hideyoshi, Kongobuji is currently the head temple of Koyasan Shingon Buddhism in Japan.

Kongobuji means “Temple of the Diamond Mountain Peak.” The temple acquired this name after joining with another temple (which was also the time when it became the head temple of Koyasan Shingon).

The entrance to Kongobuji (which dates to 1593) lies on the main street of Mount Koya, about a block from the visitor center. It’s lovely at any time of year, but spectacular in the autumn: 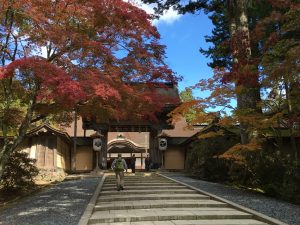 The roofed gate opens onto an enormous central yard. Directly ahead: the temple’s main building, which holds the worship hall, as well as the ohiroma, a room with gilded sliding doors painted with landscape scenes and cranes. Once used for important ceremonies, the ohiroma is off-limits to photography (so you’ll need to go and see it for yourself!). 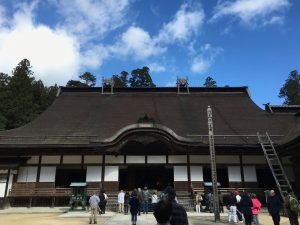 Here’s another view of the yard, as seen through another gate to the right of the main hall: 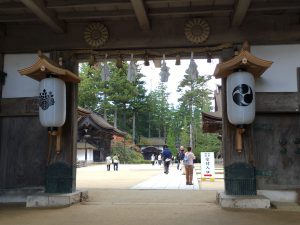 The temple treasure house stands to the right of the entry gates. 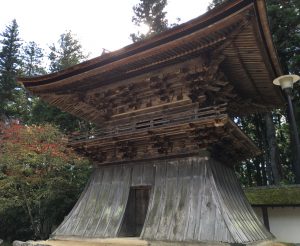 Like many Buddhist and Shinto treasure houses, it features an elevated foundation to protect the treasures inside against flooding and animal invasion. 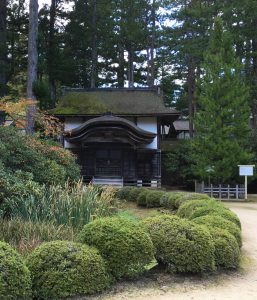 To the left of the entrance, a small hall stands beside a Japanese umbrella pine (Koya-maki). The pine (to the right of the hall, above) was planted in 1977 to commemorate the Showa Emperor’s visit to Kongobuji. Planting trees is a traditional way to commemorate an important visit or event to a shrine, temple, or other site in Japan.

After walking around the yard, visitors stop to leave their shoes in a rack at the entrance to the main hall, and pay a small (about $3) entry fee, before continuing inside. 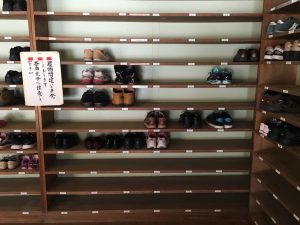 Although photos are forbidden in some parts of the temple (see above) other parts can be photographed, and I’ll take you there on Friday. I hope you’ll come back and join me then!