The 100 Summits Project has taught me many things–most of which, I’m saving for the book, but a few of these lessons bear repeating here, as well as in the larger story.

Case in point: the snail’s pace. 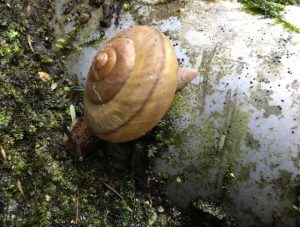 I saw this lovely fellow climbing down a wall on Mt. Daimonji, in Kyoto, about a week ago.

The photo doesn’t show it, but he’s sitting on the side of a nearly vertical wall of large cut stones that served as a bulwark holding up the mountainside. Around him, the September typhoon had toppled giant trees like matchsticks in the hands of an angry mountain god. A nearby stream escaped its banks, stopped up by more detritus from the storm. Overhead, a legion of giant crows conversed and called, establishing their territories in the forest canopy.

Meanwhile, the snail slowly munched the moss that lay before him.

The snail did not worry about the aspects of the forest far too large for him to change. In truth, he lacked the mental acuity to even understand the existence of the fallen trees, the stream, or the calling crows. His life, and his attention, focused on the things that mattered: moss, his path, and the fact that my camera represented no immediate, recognizable threat.

In other words: he was busy living his life instead of worrying about the things he could not control.

Analogies often break down at the individual level, and it’s true that humans notice–and can influence–far more of their environment than snails. That said, we can also burn years off our lives worrying about the things we cannot change, control, or influence. Our fears consume us, and we lose the peace of a day, an afternoon, or even a moment’s satisfaction with the blessings that we have.

For this afternoon, at least, I choose to imitate the snail.

2 thoughts on “A Precious Moment At a Snail’s Pace”