The hexagonal sutra repository at Danjo Garan, on Koyasan, was constructed during the 12th century to hold a complete set of the Chinese Tripitaka (the entire set of sacred Buddhist texts). Although the current building only dates to the twentieth century (a fire destroyed the original) it remains a lovely example of Shingon Buddhist architecture. 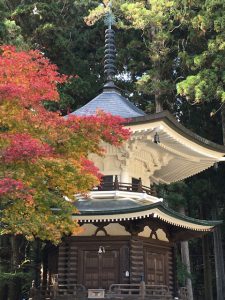 Fortunately, the sacred scrolls were not lost in the fire. They were moved to the Reihokan Museum (also on Koyasan) where they remain today. 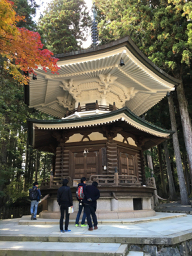 The repository stands two stories tall and features the sloping eaves and spire traditional in pagoda-style architecture. The current version was rebuilt using the original design, and is considered a faithful reproduction of the 12th century building.

Like the rest of Danjo Garan, it’s beautiful in the autumn, when the maples put on a fiery show. 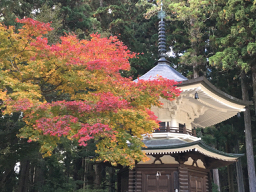 On the morning I visited I saw several pilgrims walking around the repository, reciting prayers, and many tourists approaching for a closer look. Koyasan can be cold in autumn, but the temperature was a lovely 60 degrees, without any wind. A perfect day for foliage viewing and a historical journey through the heart of Shingon Buddhism in Japan.

I love visiting historical religious sites – regardless of whether I follow the religion in question – because religion (and religious history) tells us a lot about people and cultures. Religious architecture often represents the best a culture has to offer (people tend to “give the best to God”–or to faith–including architecture). Although history is filled with negative actions taken in the name of religion, faith has also led to great advances in architecture, art, and society – especially on Koyasan, where centuries of Buddhist practice has led to a beautiful, peaceful sanctuary that welcomes everyone who shares the goals of enlightenment and peace.

Have you visited any sacred sites? What do you think about religious art and architecture?