Yesterday (May 20, 2018) I climbed my first hyakumeizan peak – Mt. Akagi, in Gunma Prefecture. 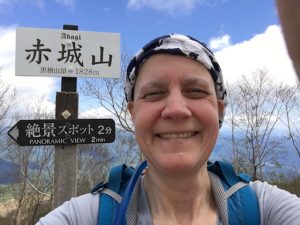 While many of the details will have to wait for the book (100 SUMMITS is under contract with Prometheus Books, for release in 2020) I’ll be sharing photo essays about my climbs, and some fun details about the mountains, here on the blog in the months to come.

Mt. Akagi is the symbol of Gunma Prefecture, and beloved by several of Japan’s famous writer (including Ryunosuke Akutagawa). It’s also a stratovolcano – a volcano built up over time by layers of ash and hardened lava – and the combination made it a great choice to begin my Hundred Summits climbs.

The trailhead sits on the right side of the road about ten minutes’ walk from the visitor center, and though it’s clearly marked, the trail beyond isn’t easy to see, which made me question whether I’d actually found it. 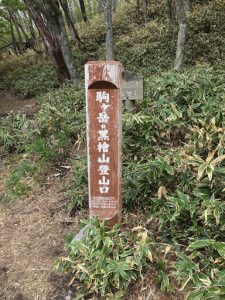 It’s easier to see looking back from a few hundred feet above the road: 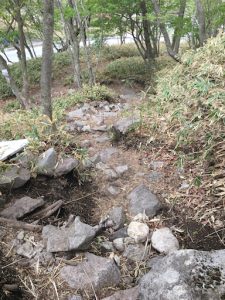 After a few minutes’ worth of rocky switchbacks, the trail reaches a series of iron staircases – which, though daunting at first appearance, actually make a difficult section of trail much easier to ascend. 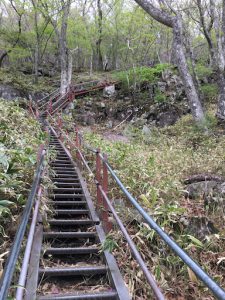 That is, assuming you don’t run into anyone heading down while you’re heading up. (I did, and although we managed to pass successfully, it’s not something I’d want to do regularly.) 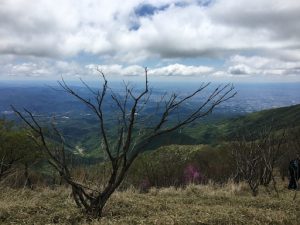 “Mount Akagi” actually consists of several peaks arrayed around a trio of crater lakes called Onuma, Konuma, and Kakumanbuchi. The largest, Onuma, is visible during most of the summit climb. 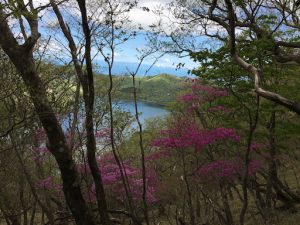 The area is also famous for wild azaleas, which had just begun to bloom. (Side note: I’m allergic to azaleas, even though I find them beautiful. My handkerchief got more than enough use to justify its minor added weight.)

I climbed a circular route that took me first to the top of 1,685-meter Mount Komagadake, which offers amazing views of Gunma Prefecture. 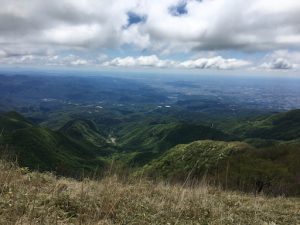 From there, I traversed along the saddle ridge that connects Komagadake-san with Akagi’s highest peak, 1,828-meter Mt. Kurubi (Kurubisan). At first, the saddle seemed easy to walk, and the high point didn’t seem that far away. 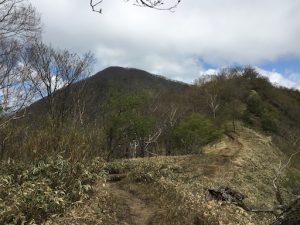 When I finished crossing the saddle, however, the path grew extremely steep: 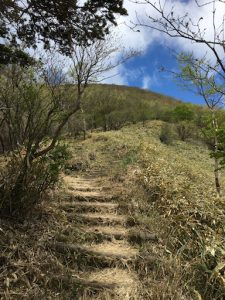 Trees lined the slope so closely that I couldn’t see the distance to the summit. I’d set 1pm as my turnaround time, because I wanted to ensure I could catch the last bus to Maibashi (and from there, my train to Tokyo), and as I struggled up the stair-lined slope toward the summit I wondered whether I might be forced to turn back without reaching my very first peak.

Not an auspicious way to start.

Fortunately, that didn’t happen. I reached the Shinto shrine near the summit at 12:30pm and snapped a couple of photos. 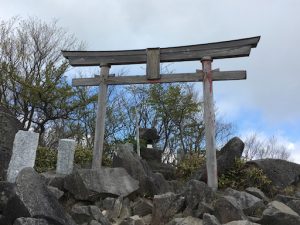 From there, I continued toward the true high point, where I took the summit photo at the top of the post.

I stopped for lunch on the summit – at least, for the portion of lunch that I hadn’t eaten earlier on the trail. A lot of hikers rest and eat on the summit plateau – many of them far more prepared and better-provisioned than I. The women next to me had a camp stove and kettle, which they used to prepare fresh tea and ramen. They also had sandwiches, fruit, and cookies.

My tandoori chicken sandwich and smoked cheese Calbee potato sticks, though delicious, felt like a poor showing by comparison.

After lunch, I started down the mountain via the “shorter” route – which, while not a mistake, exactly, reminded me that route selection makes a difference in the mountains.

To find out why, and how I suffered the consequences of that choice, click here.

One thought on “To the Summit of Mt. Akagi!”