With apologies for the tardy post (this week got away from me), the hyakumeizan total now stands at two! Only 98 more to go . . . 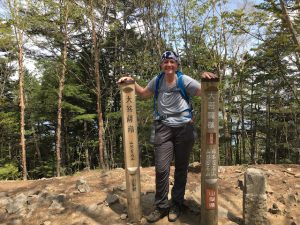 Last Sunday I took a two and a half hour train ride from Tokyo to Chichibu-Tama-Kai National Park, in Yamanashi Prefecture, to attempt an ascent of 2,057-meter Daibosatsu. Although Kyūya Fukada’s One Hundred Mountains of Japan describes the shorter, 40-minute ascent from a nearby pass (the location of the highest bus stop where hikers can depart), I started from the mouth of the trail, more than a thousand meters lower on the mountain. 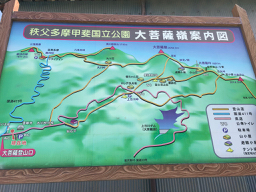 The highest bus stop sits at the top of that curling blue road on the left side of the map above. I got off at the red-flagged spot in the lower left (which basically reads “YOU ARE HERE”). This wasn’t machismo, incidentally. I didn’t know the higher entry point was a thing – and 36,000 steps later, I really, really wished I’d known there was an easier option in advance.

I really earned my summit pin on this one.

The trailhead sits about fifteen minutes’ walk up a switchback mountain road from the bus stop. 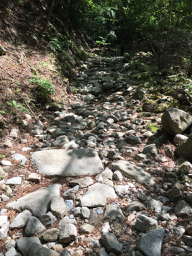 From there, the trail followed a burbling, rushing stream for another 15 minutes or so, before signposts pointed UP to the peak . . . 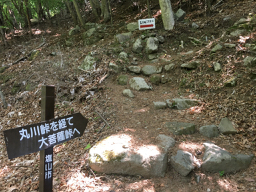 … and the trail was pretty much “Solid Up” from that point onward.

Every once in a while, the path smoothed out along a shoulder or saddle – usually just long enough to make me (foolishly) believe I might have reached an easy bit. 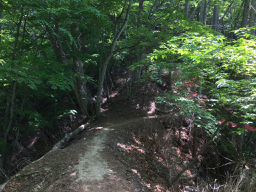 And they were easy bits. Emphasis on bits.

The map at the trailhead indicated it should take about 90 minutes to reach the emergency hut on the mountain’s shoulder (the one in the middle of the map photo above). Unfortunately, my penchant for enjoying the trail and photographing every interesting piece of the journey means my hiking time was a little bit longer–half an hour longer than the estimate, to be exact.

That said, I did eventually emerge from the forest into a field of grasses interspersed with trees and wild azaleas – and at the end of the field, I saw the hut! 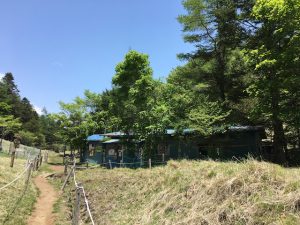 Based on the hiking map, I guessed the summit lay about an hour beyond the hut. Since I wanted to ensure I made it back to the bottom in time for the 4pm bus back to Enzan Station, I decided to continue up the trail instead of stopping for tea and a rest at the hut.

After almost an hour of hiking, I crested the top of what I thought was the summit — only to see the true summit rising at least as high above my then-current position as I’d already ascended from the hut. 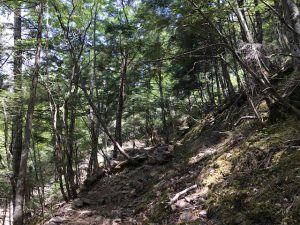 I might have said a bad word. Or two.

My hopes of hitting the summit by noon cratered into the ground, and I began to worry that I might not make the last bus back to Enzan station after all. Hoping I’d be able to manage enough Japanese to call a taxi from the trailhead, I continued up the hill. (Going back was not an option – the trail down from the summit was shorter, and faster, than turning around and retracing the trail I’d come up – or at least, I thought so at the time.)

Forty-five minutes later, and fifteen minutes past the time I’d hoped to start my descent, I reached the summit ridge. 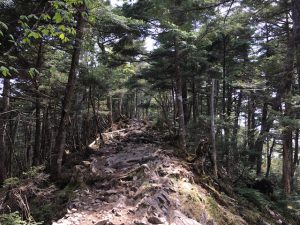 Fortunately, the final push was short, and a few minutes later I stood at the high point of Daibosatsu, 2,057 meters – as of that day, the highest mountain I had ever climbed!

Although I originally planned to stop for lunch atop the peak, a swarm of vicious biting flies had the same idea–with me as the entree course–so I snapped a quick summit photo (with the aid of two women who reached the peak from the opposite side at the same time I did – I took their photo, they took mine, and we separated to descend via the trails the others had used coming up.)

The trek back down has a story of its own–the short version being “no trail is as short as you believe it’s going to be.” For the longer version, you’ll have to wait for my upcoming book, 100 SUMMITS (Prometheus Books, 2020) – because this blog has already gone longer than I planned, and I’ve got to get some sleep . . . tomorrow I’m hoping to attempt an ascent of Mount Iwaki (1,625 meters) in Hirosaki! Wish me luck!

One thought on “To the Summit of Daibosatsu!”