While hiking Koboyama, I passed many shrines and temple buildings, indicators of the mountain’s history and holy status. However, the most poignant of these was not identified with a roadside sign, or even set at a noticeable place along the path. 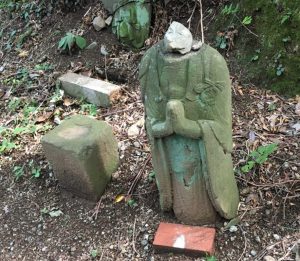 About twenty minutes past the summit of Koboyama, I came across a row of carved stone buddhas by the side of the trail. Each had been decapitated–and someone had replaced their heads with stones.

The decapitation most likely occurred during the Meiji Era, when the official state policy of shinbutsu bunri (separation of Shintō from Buddhism) resulted in the removal, closure, and desecration of certain Buddhist holy sites. In some cases, Buddhas like these were decapitated – though as the photo shows, at some point someone (most likely Buddhist worshippers) replaced the Buddha’s heads with stones.

If you look closely, you can see facial features on the stone – which makes the “restoration” even more interesting.

The restoration of these Buddhas, and the continuing influence of Buddhism and temples on Japanese culture (and, for many, daily life) is testament to the difficulty inherent in state attempts to expunge religious beliefs. Where faith persists, monuments will also – even if the original pieces must be replaced by stones.