Kyoto’s Eikan-do Zenrin-ji is the head temple of the Seizan branch of Pure Land Buddhism in Japan. The temple sits near the southern end of the famous Philosopher’s Path, and although it’s famous for autumn foliage, the temple gardens are spectacular year-round. 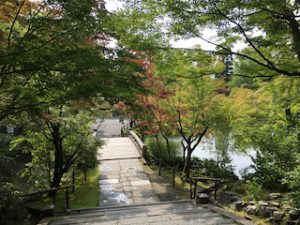 The photo above shows the path that leads from the gardens (and pagoda hill) down to the temple’s beautiful lake.

(To see this tour of Eikan-do from the beginning, click here) 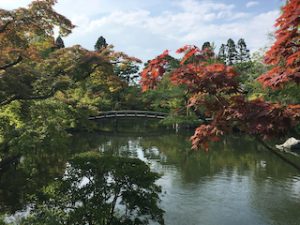 The lake is surrounded by Japanese maple trees, some of which blaze with fiery color even in summertime. 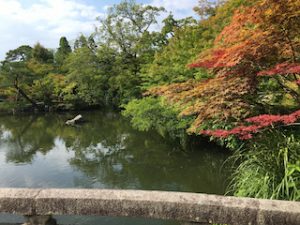 The temple’s halls enshrine a famous statue of Amida Buddha that dates to the 12th century. A stone carving of Amida also stands near the path that leads to the lake. 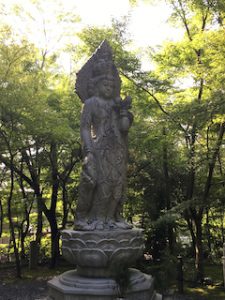 Large, colorful koi swim peacefully through the lake and around the island in its center. The island is home to a Shinto shrine – a rare sight on Buddhist temple grounds. 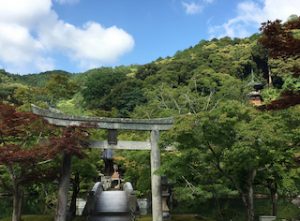 Until 1868 (the start of the Meiji Period) Buddhist temples and Shinto shrines often shared the same grounds, and some Shinto kami were equated with Buddhist deities. However, during the Meiji Era, Buddhism was often viewed as a “foreign import” (it originated in India, and came to Japan by way of China) and thus disfavored compared with the native Shinto faith. 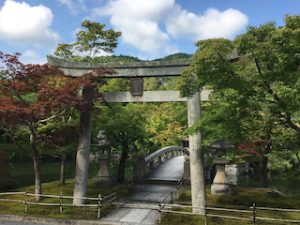 In 1868, the Meiji government issued the “Kami and Buddhas Separation Order,” imposing shinbutsu bunri, or the separation of Shinto and Buddhism. Initially, this resulted in the confiscation of temple lands, forcing some Buddhist priests to abandon their faith, and the destruction of certain texts and artifacts. Buddhist and Shinto holy sites were forced to separate from one another, physically as well as doctrinally.

Despite its initial destructive fervor, the process slowed within a few years, and by 1873 the restrictions were, if not relaxed, not strictly enforced. Today, it’s possible to find a few Buddhist temples that still have Shinto shrines on the temple grounds–and Eikan-do is one of these unusual (and lovely) sites.

The torii, which marks the entrance to a Shinto sacred space, sits on the edge of the lake at the end of a narrow bridge. The shrine itself sits on the small island at the center of the lake, half hidden by trees. 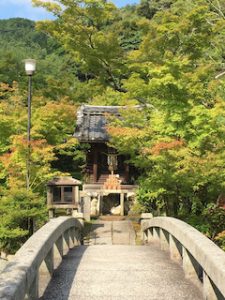 Many visitors don’t recognize the historical importance of sites like these, where Shinto and Buddhist architecture and worship sites sit side by side. If you visit Eikan-do, be sure to visit not only the pagoda and the gardens, but the Shinto shrine on the lake that attests to a time when Japan’s two main religions coexisted more closely than they do in most parts of Japan today. 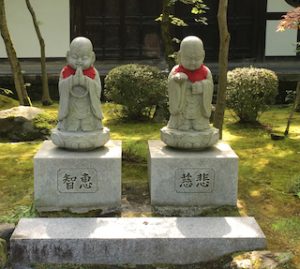 Have you visited shrines or temples in Japan? What would you like to see, if you had the chance to visit?