Tomorrow morning (July 3 in Japan, though it’s only dawning July 2 in the U.S. now) I’m traveling to Koyasan (Mount Koya), in Wakayama Prefecture — one of Japan’s most sacred peaks and the setting for my newest Hiro Hattori mystery, Trial on Mount Koya, which releases July 3.

As part of my ongoing project to climb 100 of Japan’s most famous peaks in a single year, I’ll be climbing and hiking on and around Mount Koya on July 3 and 4, to celebrate the release of this new novel.

Mount Koya isn’t on the official list of Nihon Hyakumeizan (100 Famous Mountains of Japan), but I’m using it as a substitute for Mount Adatara, in Fukushima, which remains too irradiated to climb safely (following the incident at the Fukushima nuclear power plant several years ago). Given my recent cancer treatment, and an abundance of caution, I needed a stand-in for Adatara, and since Koyasan is within a few meters of the same height, it seemed like a natural choice.

I’ll be spending the nights of July 3 and 4 at Ekoin, my favorite shukubo (temple lodging) on Koyasan, and the temple that served as the inspiration for Myo-in, the fictitious temple in Trial on Mount Koya. 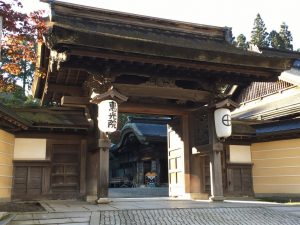 Ekoin was established over a thousand years ago, and remains an active Shingon Buddhist temple to this day. The priests welcome visitors of all faiths, and open their morning worship services and goma fire ceremony to visitors year-round. 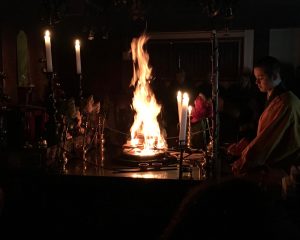 They also serve delicious shojin ryori–Buddhist temple cuisine–a traditional style of cooking that originated in temples and contains no animal products. That doesn’t mean it’s short on flavor, though. A shojin ryori meal traditionally contains a multitude of colors, flavors, and textures, as well as both hot and cold dishes. 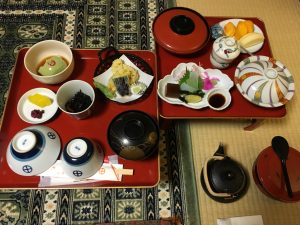 It’s my favorite style of cooking in Japan–really, my favorite in the world–and Ekoin has some of the best I’ve tasted in Japan.

Although the current weather report suggests I may find myself trapped inside the temple while a storm rages around me on the peak, if it happens, I’ll consider it poetic justice. After all, that’s precisely what I did to Hiro and Father Mateo in this soon-to-be-released adventure.

I’m just glad I’m not likely to find myself trapped with a killer who poses his victims as the Buddhist judges of the afterlife, the way they did. Here’s hoping my adventure has a little less excitement than they encounter on the page!