These lion-dog statues, commonly carved from stone, watch over the entrance to the inner shrines at many Shinto holy sites. At some, the statues are hidden from view, but others, like Fushimi Inari Taisha, have komainu on display as well.

In addition to guarding the inner sanctum, many shrines and Buddhist temples have komainu on display at the entry gates.

Traditionally, komainu are placed at the entrance to a holy site to ward off evil spirits. Some of the statues have open mouths, while other komainu‘s mouths are closed. The open-mouthed statues, known as a-gyō, are saying “a,” the first letter of the Sanskrit alphabet.

The closed-mouthed statues, called  un-gyō, are saying “um,” the final letter of the Sanskrit alphabet.

Together, the statues are saying aum (sometimes written “om” in English), which is a sacred syllables and sound in Buddhism and Hinduism. 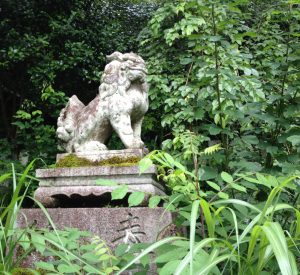 Although the lion-dog’s symbology ties directly to Buddhism (and Hinduism, though that religion is far less commonly practiced in Japan), komainu are overwhelmingly present at Shinto shrines as well. In fact, most of my komainu photographs were taken at Shinto sites rather than Buddhist temples. This isn’t necessarily surprising, however. Japan’s indigenous religion has no conflict with Buddhism, and Shinto sites frequently feature Buddhist guardians and deities.

Komainu are the Japanese version of “fu dogs” (in Chinese, “shi”), and fill a similar purpose, guarding the entrances to sacred spaces and warding off evil. If you travel in Japan, you’ll see komainu everywhere–generally at sacred sites but also in front of homes and businesses. Their ubiquitous presence speaks to both the Japanese love for tradition and the pervasive influence of Buddhist and Shinto thought. 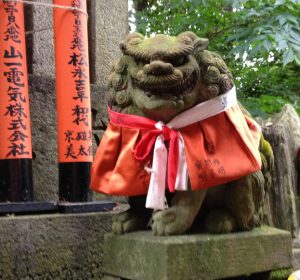 Whether you see them as guardians, wards against evil, or simply a unique facet of Japanese culture, if you go to Japan, you’ll definitely see them. If you look carefully, you’ll notice that though they look almost the same, the artists who make these special statues still manage to imbue them with individual personalities, especially in their expressions. 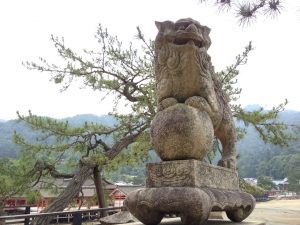 Take a closer look at these komainu: which one is your favorite?