Last week’s high-temperature, high-humidity hike in Kanagawa Prefecture took me to the summits of three more peaks: Sangenyama, Gongenyama, and Kōbōyama. (For the story and photos from the first two peaks, click here.)

The trail from Gongenyama’s summit down the ridge toward Kōbōyama starts off a highly civilized set of stairs with trees on either side. 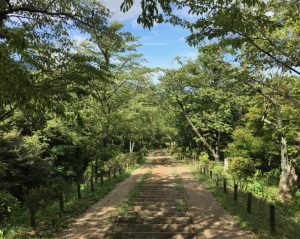 At the foot of the stairs, a short section of trail leads to a parking lot where people who prefer to drive to the summit, rather than hiking, can leave their vehicles for the 15-minute stair-walk to Gongenyama.

This setup is fairly common in Japan, where people love mountains and enjoy spending time in nature. Many Japanese mountains have hiking trails up one side and roads up the other, allowing even the non-hiking-inclined to enjoy the mountain peaks. Fortunately, many other mountains don’t have this “feature” — and even the ones that do often have an unspoiled hiking side as well as a drivable route.

From the parking lot, a different trail branches off to the summit of Kōbōyama–a peak which gets its name because Kōbō Daishi meditated on its summit during the 9th century. 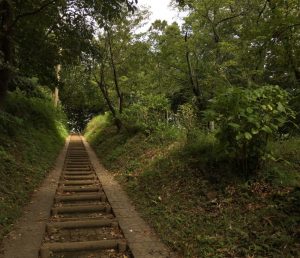 Kōbō Daishi, also known as Kūkai, is the priest who brought Shingon (esoteric) Buddhism to Japan from China. He founded many temples, as well as the famous temple complex atop Kōyasan that remains the heart of Shingon Buddhism in Japan. His relationship to the mountain is the reason these peaks made the 100 Summits Project list – my most recent mystery novel, TRIAL ON MOUNT KOYA, takes place on Koyasan and includes a mention of O-Daishi-sama.

The summit of Kōbōyama has a temple and bronze bell that date to the 17th century, along with a well that, according to legend, flows with milk for those who pray with fervent belief. 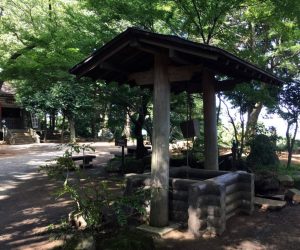 The well gave me only water. Feel free to draw your own conclusions.

After leaving the summit of Kōbōyama, I hiked down the opposite side–a 3km trail that descended the lovely forested slopes and climbed once more–to the summit of Ozumayama–before making a final descent to the JR station. (I’m not counting Ozumayama toward the 100 summits because it only rises 154 meters above sea level, and I’m trying to climb mountains over 200 meters–over 500 when I can.) 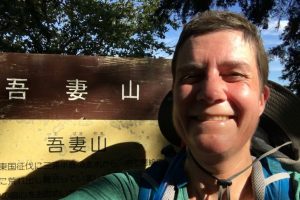 Although Japanese mountains generally have fantastic signage, I did hit one sticky point–which I’ll share here in case it might prove useful. My final destination was Tsurumaki Onsen Eki (station), and most of the signs included an arrow pointing in the direction of either Tsurumaki Onsen or the station (they’re adjacent to one another). However, one signboard didn’t offer any immediate guidance . . . until I noticed the small white sticker in the lower right corner of one of the boards. 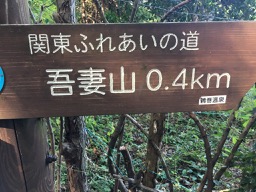 The sticker reads “tsurumaki onsen” – but unless you read Japanese or know what you’re looking for, it’s easy to miss. 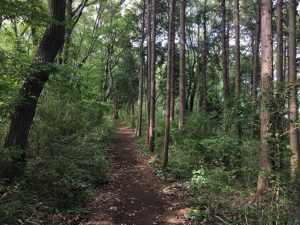 From there, it was a lovely, shady hike downhill to the station, where I caught a train back to Tokyo . . . and even arrived in time to meet my son for dinner!

Despite the heat, and a mild case of heat exhaustion from salt depletion (please carry salty snacks and plenty of water if you hike, especially in the summer!) I enjoyed the afternoon immensely.

Have you ever hiked multiple peaks in a single day? Would you like to try?