Anyone who climbs mountains regularly knows that the climber gets to plan, and to attempt, but the mountain has a say–if not a deciding voice–in whether or not you stand upon its peak. In some cases, that also goes for whether or not you even see the summit.

And in my case, where Mt. Fuji is concerned, that answer has almost always been a cloudy–but resounding–“no.” For example, this non-view of Fuji from Fujinomiya on the morning before my summit attempt: 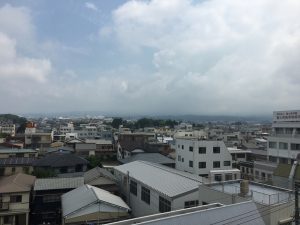 In the course of seven trips to Japan, almost nine months’ worth of total time in-country, and over 60 visits to various sites which claim to have views of Japan’s most famous peak, Fujisan has continually rejected my attempts to view it personally.

Until today, my views consisted of one five-second glimpse from a moving train in 2016 and a bleary-eyed (but startled) 5am viewing on the morning I left to climb the peak 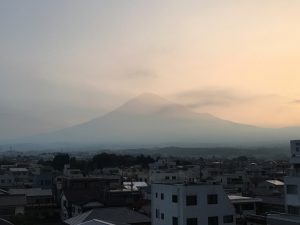 – which had disappeared behind clouds by the time I woke up for real at 7.

This morning, fellow crime writer Annamaria Alfieri and I hopped a shinkansen from Tokyo to Odawara, and then a train to the mountainous onsen (volcanic hot spring) resort of Hakone – a place I’ve visited nine times before, which is famous for both its hot spring waters and its views of Fujisan. Not that I’d ever seen one: 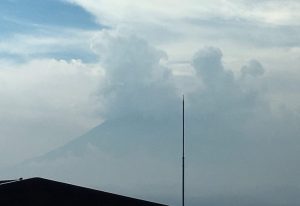 The morning dawned bright and clear, and though I hoped for a glimpse of Fuji, I wasn’t putting any eggs in that particular emotional basket. We rode the electric train to the cable car, then boarded the gondola, and headed up to Owakudani, the volcanic crater from which Fuji can allegedly be seen.

There was nothing alleged about the view today: 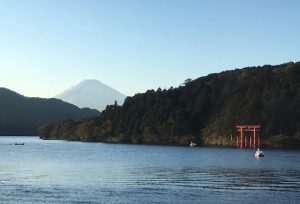 I fell in love with Fujisan as a kindergartener, the first time I ever saw a photograph of its iconic peak. For 47 years, I’ve longed to have the chance to really gaze upon it – really see it, rather than merely catching a glimpse from a moving train. Although I’m not superstitious, I’d begun to wonder whether the mountain was waiting for me to make the effort–and the pilgrimage–to climb to the summit before allowing me a view of its famous peak.

This was my first visit to a Fuji view spot after climbing to Fuji’s summit last July. 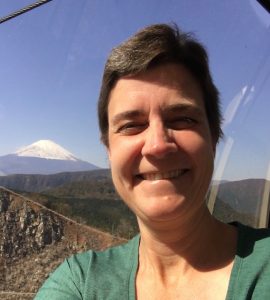 Superstitious or not, I think I have my answer.