Founded by the monk Kūkai (Kōbō Daishi) during the 9th century, Danjo Garan continues to function as the heart of Koyasan Shingon Buddhism in Japan. While the entire kōya (mountaintop valley) is considered a single “temple,” the complex at Danjo Garan holds many important historical structures that still serve a role in modern Buddhist worship – including the Fudō-do, or Fudō Hall. 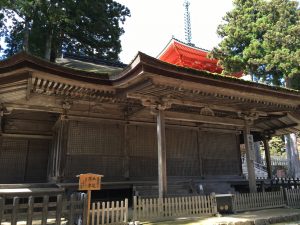 (To read this series on Koya from the beginning, click here.)

In Shingon Buddhist belief, Fudō Myō-ō is an incarnation of the Buddha and the leader of the wisdom kings. He protects the living and guides them toward enlightenment. Fudō is normally portrayed seated on a rock to demonstrate his immovable nature (he is also called “the immoveable one”) and crowned with a halo of living flame. He typically carries a sword in one hand and a rope in the other, and may be shown with one eye open and the other partially closed–symbolizing his ability to watch earth and heaven simultaneously. 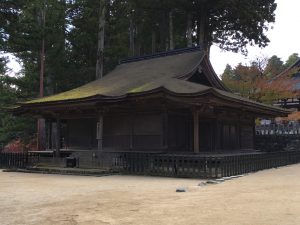 The current Fudō-do, or Fudō Hall, at Danjo Garan dates to the 14th century. However, the original hall was built in 1197 on the orders of an imperial princess, Hachijo Nyoin. (Women were not allowed on Kōya until the 19th century, but many women practiced Shingon Buddhism and venerated Koyasan even before they could travel to the sacred peak.)

The building once enshrined statues of Fudō Myō-ō and eight attendants. Today, Fudō remains in place but the attendants’ statues have been moved to the Reihokan Museum (about a five minute walk from the Fudō-do). 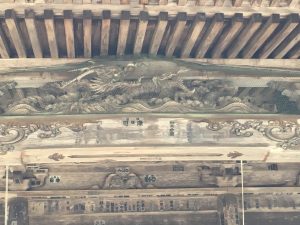 Although the interior of the hall (and the Fudō statue) is off limits to visitors, the building’s entrance features elaborate carvings and its graceful, lovely architecture is also worth a special look. 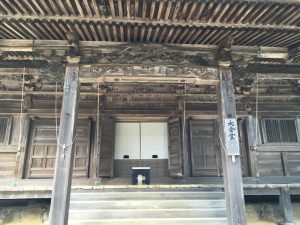 The buildings at Danjo Garan can seem confusing–and often similar–to visitors who don’t understand the history and significance of the various sites, but it’s worth the time to take a tour or read up on the area’s history before you go. A little knowledge makes everything in life more fascinating!

I hope you’ll join me Monday, as we continue this virtual walk through Danjo Garan!