Japanese rail and subway stations sell some of the best snack food anywhere. 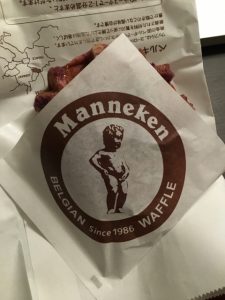 You can find Manneken Waffle shops in many of Japan’s larger cities, and most of the major train stations have a Manneken shop inside.

The logo – line art of the famous Mannekin Pis statue in Brussels, seems an odd choice for a waffle shop, but considering that the statue is a well-known Belgian symbol, and the shop sells Belgian-style waffles, it’s more entertaining than weird.

Mannekin Waffle shops sell a fairly large variety of waffles, from the expected (“plain” and chocolate chip) to the unexpected–like this “grape” waffle I picked up in Kyoto station: 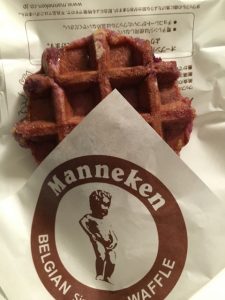 The shop also features monthly “specials,” with seasonal ingredients. Last October, the menu included a pumpkin waffle, which I passed on because it’s not my thing. However, November brought “caramel apple” – an apple waffle with caramel icing and a chocolate drizzle: 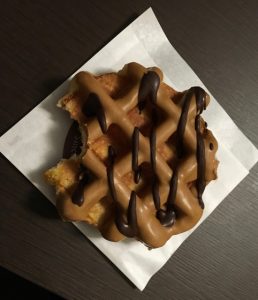 Delicious in every way.

Mannekin waffles are not overly sweet. Even the caramel apple one pictured above used a sour apple dough to complement the caramel icing (which, surprisingly, wasn’t sweet enough to overpower the waffle). I expected it to be a sugar bomb, but in reality it was extremely well balanced: sour, sweet, and crispy on the outside with a tender center.

If you’re traveling in Japan, keep your eyes out for mannekin pis…a tasty waffle won’t be far away.