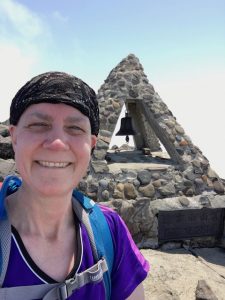 Tohoku is the northernmost part of Japan’s largest island, Honshu – the same island where Tokyo and Kyoto are located, but many hours’ travel to the north, via shinkansen (bullet train). It took me almost 7 hours to travel from Tokyo to Hirosaki, the closest town to Mt. Iwaki – four hours on a high-speed shinkansen, and another 2:45 on a local train. These mountains are spread all across Japan, which means I get to travel the entire length of the country while I’m climbing.

Last night I stayed at the Hotel Route Inn across from Hirosaki Station – convenient for the bus to the mountain as well as for the train. 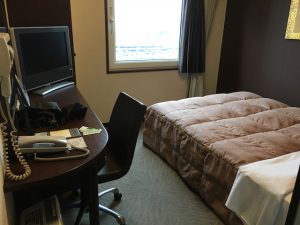 This morning I woke up early, hoping that yesterday’s rain had stopped. It had (fortunately for my summit attempt) but the clouds and mist remained.

The standard route up Iwaki involves a bus from Hiroaski Station to Dake Onsen (a famed hot spring from the Edo period) and then a Skyline Shuttle bus to the “lift” that carries hikers to the start of the trail. It’s possible to climb from lower down – from the onsen, or even from the shrine at the base of the mountain – but most Japanese climbers start from the lift, and so did I. (Making things harder than they need to be is fair, if you want that challenge, but I’m taking the standard  route.)

Mist shrouded the lift – but not completely. I could see large patches of snow beneath the bushes on either side. 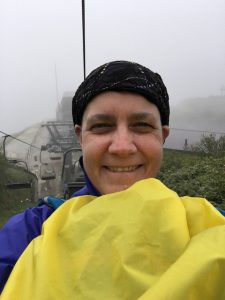 The lift let me off at the trailhead, at an elevation of 1,470 meters. But if I thought the lift had done the hard work for me, I was mistaken – a fact the trail proved within the first five minutes, when I reached the first of several rockfalls: 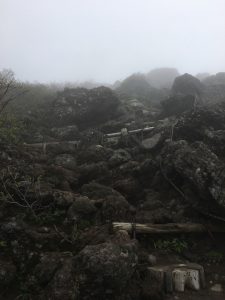 Note the ropes and log-barriers to provide “stability.”

Beyond the initial climb, the trail evened out. I passed a large snowbank: 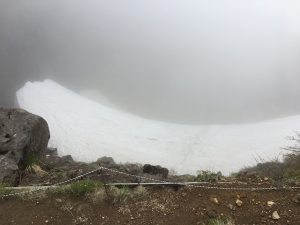 and then a mountain hut: 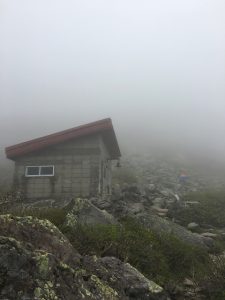 Just beyond the hut, the mist began to lift — I’d begun to climb through it — revealing a second, larger and steeper rockfall. 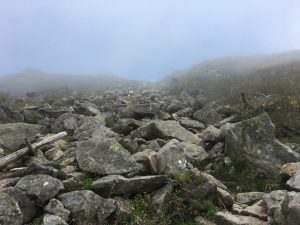 That looks totally safe to me. Right?

While climbing up, I had to face an even bigger fear – the realization that I’d have to come back down the same way. I don’t mind climbing up, but coming down, I’m afraid of falling. Some of these rocks were loose, and though I felt fairly confident going up, I didn’t like the thought of returning. That said, the summit was at the top – and I wanted the summit too badly to surrender to my fear.

Except that the top was NOT the summit after all. Psych! 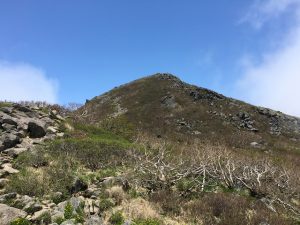 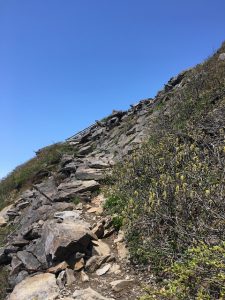 As the photos show, I’d climbed through the layer of clouds that socked in Aomori Prefecture. On a clear day, you can apparently see all the way to the Pacific Ocean from Iwaki’s summit. All I saw was clouds, but the view was still spectacular. 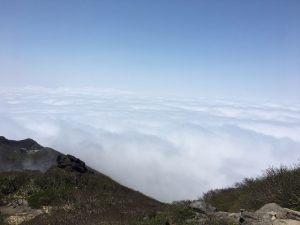 I reached the summit just after noon, took a summit photo, and rang the bell in the cairn atop the mountain.

The bell is VERY LOUD.

I also visited the Shinto shrine on the mountaintop. Like many Japanese mountains, Iwaki is a holy place. 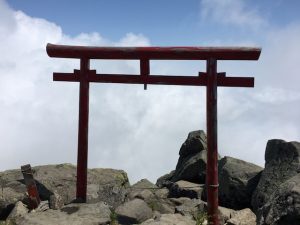 Although I was the only human on the summit, I shared the peak with a swarm of bees and a startling number of multicolored beetles. I saw iridescent green ones, blue ones, red ones, spotted and striped ones – including this little odd specimen who hopped a ride on my backpack (which I’ve christened “Blue”): 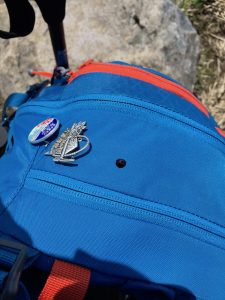 After a short stay, I headed back down – enjoying the views along the way. I also snapped this shot from the start of the rockfall that frightened me earlier. 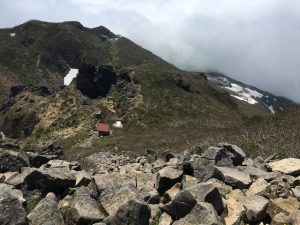 If you look carefully, you can see the hut’s red roof, the lift on the shoulder of the mountain almost directly above it in the frame, and the visitor center on the right side, just to the left of that large patch of unmelted snow.

I reached the bottom again without incident, and with enough oomph left in my stride to pay a quick afternoon visit to Hirosaki Castle – but those photos will have to wait for another day!