Yesterday morning, I completed the second non-solo ascent of my 100 Summits Project: Mount Inari (Fushimi Inari Taisha) in Kyoto. The day before, I traveled from Tokyo to Kyoto via shinkansen (bullet train) with my mother, stepdad, and family friends Laurie and Kaitlyn Bolland (as well as my son) to begin several days of hiking and R&R in advance of our planned ascent of Mt. Fuji later this week. 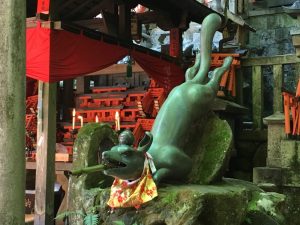 (While the weather may not cooperate on Fuji, we’re hoping the predicted storms pass by and we get the chance to climb.)

But yesterday (July 15, 2018) we had a different mountain in our sights: 233-meter Mount Inari, home to Fushimi Inari Taisha (shrine) – one of my favorite Shintō shrines. Inari is one of Japan’s most popular kami (Shintō deities) – the patron of rice, sake, fertility, swordsmiths, business, and many other endeavors. 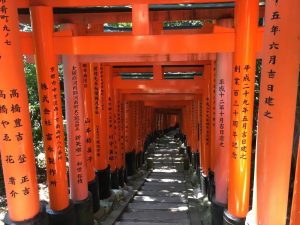 Although Japan has more than 10,000 Inari shrines–generally identifiable by their numerous red torii–Fushimi Inari is the most important Inari shrine in the country, and also the largest. 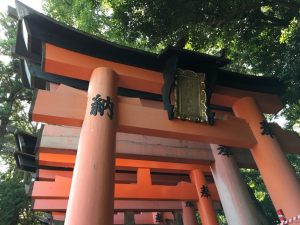 The shrine’s many paths (and hundreds, if not thousands of stairs) lead all the way to the summit of Mt. Inari. Thousands of torii line the slopes. 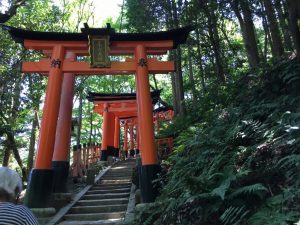 While not a difficult climb, or a long one (the trails are about 4 km, start to finish), and although it’s not on the hyakumeizan list, Inariyama was the first mountain I ever climbed in Japan, and I wanted to include it in the 100 Summits Project for that reason.

I made the climb with my mother, Laurie, and Kaitlyn–and despite a heat index of 104 degrees, all four of us made it to the summit. 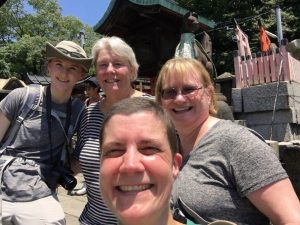 While climbing, we also visited Fushimi Kandakara Shrine, a sub-shrine dedicated to Amaterasu Omikami, the sun goddess who holds the highest place in the Shintō pantheon. 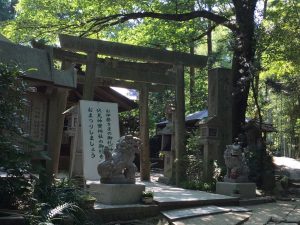 The climb was a good dry run for Mount Fuji, despite the mountain’s diminutive size, because it gave us a way to gauge how we climbed as a group (quite well!), to test our pacing plan (check in at the stations, but otherwise hike at our own paces along the way), and to see how we handled the summer heat–which should be considerably worse in Kyoto than on Mount Fuji. (We all hate the heat with equal passion, but no one succumbed to it during the hike.)

All things considered, this hike was a resounding success, and bodes well for Fuji, assuming the thunderstorms let up long enough for us to make an attempt. Here’s hoping we get the window we need–tune in on Friday and I’ll let you know!