Since Mt. Adatara still has radiation levels too high for a safe post-cancer climb, I substituted Bentendake, on Koyasan, for the Adatara hyakumeizan climb. (The peaks are within a few meters of one another in height, with Bentendake measuring slightly higher.) 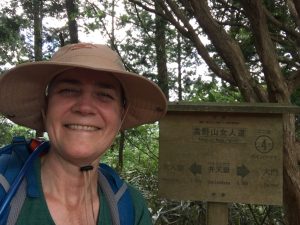 And since my newest Hiro Hattori mystery novel, TRIAL ON MOUNT KOYA, is set on Koyasan, I climbed Bentendake last Tuesday (July 3, 2018) – the day the book released into the world.

In a twist of poetic irony, I arrived on Koyasan just hours ahead of a massive storm – precisely the way my detectives, master ninja Hiro Hattori and Portuguese Jesuit Father Mateo, do in the opening pages of the book.

I left my luggage at Ekoin, the thousand year-old Shingon Buddhist temple where I’d be spending the next two nights, and headed for the last remaining nyonindo to begin my climb to the peak. 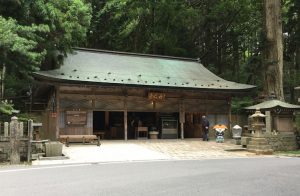 Due to Buddhist taboos, women could not enter the sacred koya (the summit valley, ringed by peaks, from which Koyasan derives its name) until the late 19th century. Until then, female visitors stayed at the nyonindo (women’s halls) that ringed the peak and traveled a women’s pilgrimage trail around the outside of the summit valley, along the mountain’s slopes. 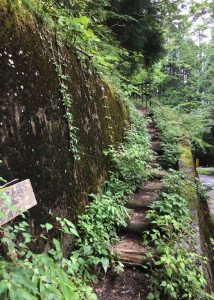 In places, the trail ran right up to the edge of a long, steep dropoff. The women who hiked this in smooth-soled pilgrim sandals must have had nerves of steel. 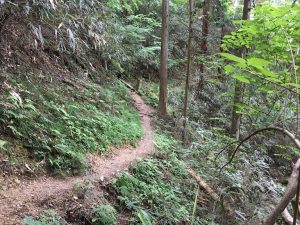 As the trail started up toward the summit of Mt. Benten, it followed the course of a deep ravine. 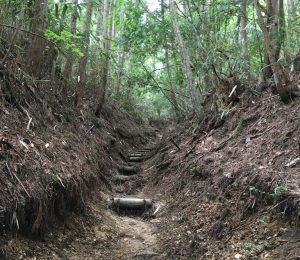 Overhead, clouds scudded across the darkening sky. The wind that whipped the trees carried the smell of approaching rain. Like Hiro and Father Mateo in my novel, I hoped I would finish the climb and reach the safety of the temple before the rain (and the forecast thunderstorm) arrived. 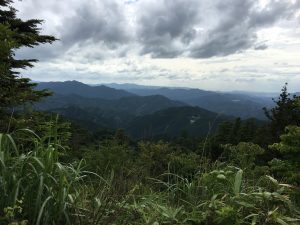 At the summit of Benten, I stopped to take the obligatory summit photo (see above) and to appreciate the Shintō shrine that sits atop the peak. Like many Japanese mountains, Bentendake is a holy place. 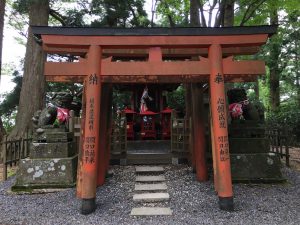 (The separation of Buddhist and Shintō holy sites is relatively recent in Japanese history. The practice of shinbutsu bunri, or separation of Shintō from Buddhism, occurred during the Meiji Restoration –   – and was never completely accomplished. This is why you sometimes still see Shintō shrines in Buddhist holy places.)

After paying my respects to the summit, I continued along the women’s pilgrim trail. Torii mark the descent, signifying the holy nature of the summit and the path. 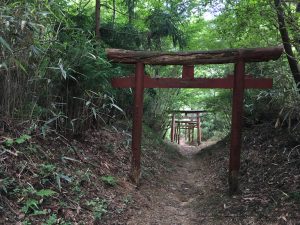 This path originally connected the seven nyonindo that ringed Koya’s peak. Today, only a single women’s hall remains; shrines and memorials mark the sites where the others once stood. 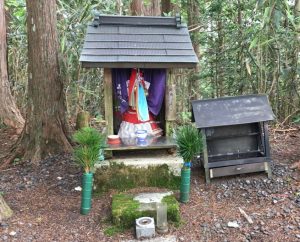 When I reached the Daimon (Great Gate) that marks the traditional entrance to Koyasan’s holy precinct, I left the women’s trail, offered a prayer on behalf of every woman who traveled to Koyasan in faith but could not enter the holy site–as well as every other woman ever told she could not do something her heart and her faith called her to do–bowed at the Daimon, and crossed the threshold, symbolically carrying each of those women with me into Koya’s Danjo Garan. 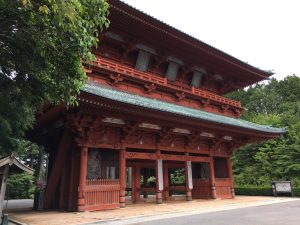 Since the rain held off, and the wind calmed down, I decided to spend some time in the sacred precinct, photographing the lovely historic halls of Danjo Garan–which remain a functioning temple complex to this day, over 1100 years after Kōbō Daishi established Koyasan as a center of Shingon Buddhist worship and study.

I’ll share more photos from the afternoon in the weeks to come – and the rain did finally arrive, but only after I reached my lovely, peaceful room at Ekoin. 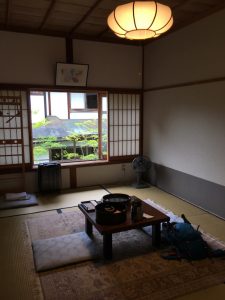 Have you visited Ekoin, or the women’s pilgrimage route on Koyasan? If not, would you like to? I’d love to hear your thoughts in the comments!