With temperatures in Tokyo soaring to near record-breaking levels, I’ve taken a few days off from my #100Summits climbs (though the adventure continues this weekend . . . so stay tuned!). Since my husband hasn’t seen much of Japan, we decided to spend this afternoon in Kamakura–a coastal city southwest of Tokyo that served as the political center of Japan during the Kamakura Period (1185-1333), when Japan was ruled by the Minamoto shoguns. 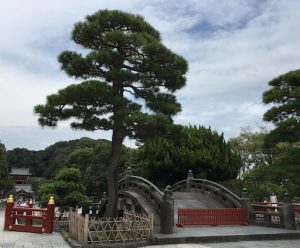 Although my mystery novels are set in the 16th century–long after Kamakura ceased to function as a center of Japanese culture and government–I love this ancient city, and enjoy spending time there when I can.

This morning, my husband and I took a train to Kamakura Station (about an hour from central Tokyo) and walked from there to Tsurugaoka Hachimangu, Kamakura’s largest Shintō shrine. After passing the bridge where emperors and shoguns once entered the shrine (pictured above) we spent some time near the lotus ponds, watching the blooms bob in the breeze. 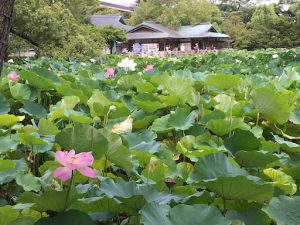 (Since it sits by the ocean, Kamakura tends to be much cooler than Tokyo on summer days – making the city an excellent day trip to beat the heat.)

We walked up the long entry path, and stopped to admire the traditional Shintō stage, where ceremonial music and dances are still performed. 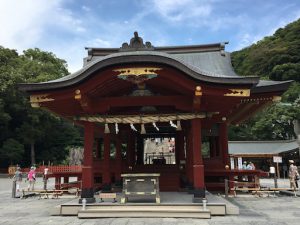 Afterward, we climbed the long staircase to the spectacular main worship hall. The brilliantly-colored eaves are carved in the shape of animals, birds (both doves and falcons), and detailed lotus flowers. Unfortunately, photographs are not permitted in the main sanctuary, or in the lovely museum where important artifacts like painted screens, kimono, and historical carvings are on display. If you visit Kamakura, you should definitely visit this portion of the shrine–it’s well worth the 20 minutes (and 200 yen admission fee) it takes to see.

Tsurugaoka Hachimangu dates to the early eleventh century; its primary enshrined deity is Hachiman, the god of warriors. Although the shrine’s sacred symbol is the dove, it’s also inhabited by many crows–the ubiquitous, swaggering corvids are everywhere in Japan. 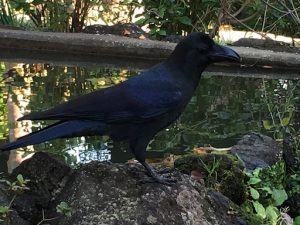 I’m fond of them, even though one of them mugged me and stole my donut during my last visit to Kamakura.

Fortunately, we didn’t get mugged by any crows today. In fact, our close encounter at the shrine was of a decidedly furrier kind–a squirrel who seemed unusually interested in the crowd, and almost jumped onto my husband’s shoulder to get a better look! 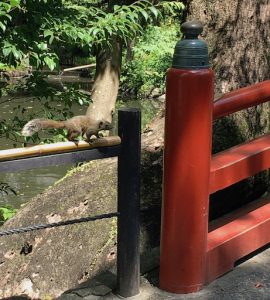 After leaving the shrine, we took the local train three stops to the south and paid a visit to Kōtoku-in, home of the Great Buddha (Daibutsu) of Kamakura – one of the largest bronze Buddhas in Japan. 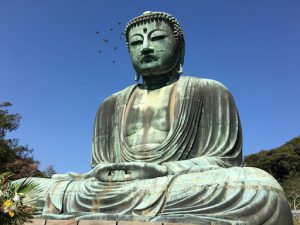 The Buddha dates to the thirteenth century – and I’ll tell you more about him in another post!