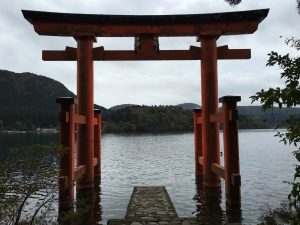 Hakone Jinja (Hakone Shrine) sits on the shore of Lake Ashi (Ashinoko) in Hakone, Kanagawa Prefecture – about an hour’s journey south of Tokyo. Its giant lakeside torii makes it among the most picturesque Shintō shrines, as well as an important historical, tourist, and religious site.

Originally founded in the mid-8th century, and moved to its current lakeside location in 1667. According to shrine records, Hakone Jinja was moved after a priest named Mangan subdued the nine-headed dragon that lived at the bottom of Lake Ashi, after which the dragon became a protector of the shrine.

Hakone Jinja honors three main deities, including the grandson of the sun goddess Amaterasu (the primary deity in the Japanese pantheon). It remains a fully functional Shintō shrine to this day.

I’ve visited the shrine a number of times, and it’s lovely in any season. The road to the shrine follows the natural curve of the lake toward the forested slope of the shrine precinct. 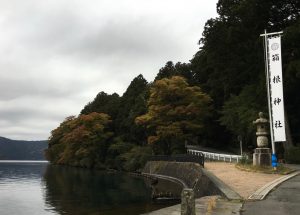 Like all Shintō holy sites, a torii stands at the entrance, marking the barrier between the secular and the sacred. 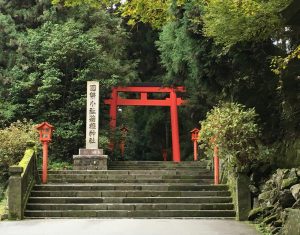 Beyond the torii, a wide paved path leads through the trees to the site of the purification fountain–another typical feature of Shintō shrines (and Buddhist temples). Visitors stop at the fountain to perform a ritual purification of the hands and mouth before continuing on to the worship site. 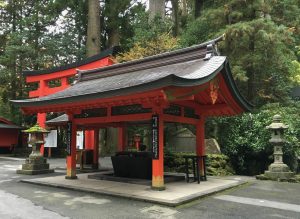 The fountain features constantly flowing water, which in this case streams from the mouth of a guardian dragon. 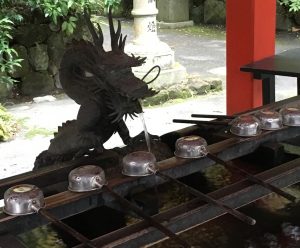 At Hakone Jinja, the traditional display of wooden plaques honoring donors to the shrine hangs in the eaves above the fountain: 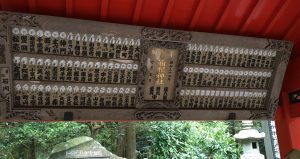 Across from the purification fountain stands an enormous cedar surrounded with ropes that designate the tree as especially sacred. 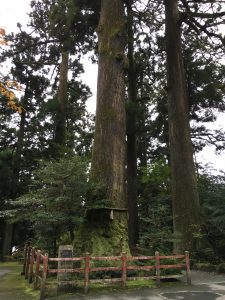 In the Shintō faith, natural objects–including trees–are believed to possess a divine spirit, and are often revered as holy. Although I’m not an adherent of the Shintō faith, I appreciate the Japanese reverence and respect for the natural world.

Beyond the purification fountain, paths lead down to the lake and up a flight of steps to the shrine’s main worship hall. I hope you’ll come back and join me Wednesday for the journey up those steps!

To continue to the next part of this series, click here!

2 thoughts on “A Visit to Hakone Shrine, Part 1”